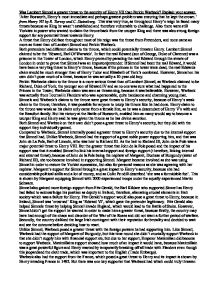 Was Lambert Simnel a greater threat to the security of Henry VII than Perkin Warbeck? Explain your answer.

Was Lambert Simnel a greater threat to the security of Henry VII than Perkin Warbeck? Explain your answer. 'After Bosworth, Henry's most immediate and perhaps greatest problem was ensuring that he kept the crown.' from Henry VII by R. Turvey and C. Steinsberg. This was very true, as throughout Henry's reign he faced many threats because as King he wasn't established and therefore vulnerable to challenge. Also there were still Yorkists in power who wanted to claim the throne back from the usurper King and there was also strong foreign support for any potential threat towards Henry. A threat that Henry did face throughout most of his reign was the threat from Pretenders, and none came as more as threat than of Lambert Simnel and Perkin Warbeck. Both pretenders had different claims to the throne, which could potentially threaten Henry. Lambert Simnel claimed to be the 'Edward, Earl Of Warwick'. In fact the real Edward (son of George, Duke of Clarence) was a prisoner in the Tower of London, which Henry proved by parading the real Edward through the streets of London in order to prove that Simnel was an impostor/pretender. If Simnel had been the real Edward, it would have been a very big threat to Henry's throne, because if the princes in the tower were dead, the real Edwards claim would be much stronger than of Henry Tudor and Elizabeth of York's combined. ...read more.

Fitz Gerald's support would also pose a great threat to Henry, because in Ireland, Simnel was 'crowned' King as 'Edward VI', which gave the pretender legitimacy. Fitz Gerald also helped Simnels threat by helping Simnel invade England, which would lead to the Battle of Stoke. However, Simnel didn't get the support he wanted in order to make him a greater threat, because firstly, the country may have had enough of the chaos and disorder of the War of the Roses and did not want a further period of warfare. Secondly, the country disliked the large Irish contingent with their reputation for brutality and decided to wait and see the outcome before deciding how to react. Unlike Simnel, Warbeck posed a greater threat with the foreign powers he had supporting him. Like Simnel, Warbeck had the support of Margaret of Burgundy, but this time round she didn't crucially support Warbeck in that she didn't supply him with financial support etc, but due to her support, Emperor Maximilian did become to support Warbeck. Maximillains support showed how much of an impact it would have, because Maximillain was a great powerful figure and Henry reacted by temporarily breaking off all trade with Flanders even though this jeopardised the cloth trade, which was important to the English (Trade Embargo). ...read more.

He raised great sums of money from Parliament and spent moths of 1497 raising troops for the largest invasion of Scotland ever seen. Henry's strike at William Stanley does enormously show how threatened Henry thought Warbeck to be, as William Stanley had helped Henry at the battle of Bosworth, and now Henry was accusing him of treason, but it also shows on the other hand, how much support Warbeck did have which could make him into a potential threat. Warbeck's execution showed 'that Henry 'would spare no traitor, however eminent.' R Truvey and C. Steinsberg. This once gain shows how much of a threat Henry perceived Warbeck to be unlike Simnel, 'the strawdoll', Warbeck had to be executed in order to end his threat, but this may also have been due to the pressure from the Spaniards. They wanted the Tudor dynasty to be secure before they allowed Catherine of Aragon to marry Prince Arthur. But how easily Warbeck's foreign powers easily gave up their support for Warbeck shows to some degree how they were using him, but also how weak his foreign support was and it is Warbeck's foreign support that made him threatening. Henry made an alliance in 1492 with France known as the Treaty of Etaples, which resolved the problem between France and England. Also in 1497 there was the seven-year true agreed at Ayton, which stopped Scotland's involvement with Warbeck. ...read more.