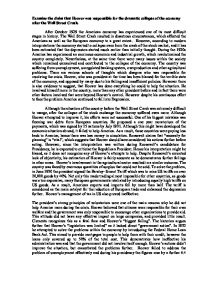 Examine the claim that Hoover was responsible for the dramatic collapse of the economy after the Wall Street Crash.

Examine the claim that Hoover was responsible for the dramatic collapse of the economy after the Wall Street Crash. After October 1929 the American economy has experienced one of its most difficult stages in history. The Wall Street Crash resulted in disastrous circumstances, which affected the American as well as the European economy to a great extent. However, according to modern interpretations the economy started to collapse even bore the crash of the stock market, and it has been estimated that the depression started much earlier than initially thought. During the 1920s America has experienced an enormous economic and industrial growth, which revolutionized the country completely. Nevertheless, at the same time there were many issues within the society which remained unresolved and contributed to the collapse of the economy. The country was suffering from unemployment, unregulated banking system, overproduction and other agricultural problems. There are various schools of thoughts which disagree who was responsible for resolving the crisis. Hoover, who was president at the time has been blamed for the terrible state of the economy, and opposed by many due to his failing and insufficient policies. ...read more.

This demonstrates how ineffective his administration was and that the government did not involve itself enough. Hoover's actions didn't improve the situation, but exacerbated the problems further. Hoover failed to address the problem of unemployment effectively and during his presidency the figures rose by a further 6.4 million. His launch of the biggest public work schemes was dependent on voluntary organization and not reliant on the federal government. He called on municipal and state governments to provide the aid and support. Since his policies were permissive rather than obligatory, they had no real effect. Hoover also recognized the issue within agricultural sector and its strong link with the failing economy. However, even despite that awareness he was not able to "show flexibility" in his principles. The Congress proposed another bill to solve the issue of overproduction by subsidizing farmers to reduce production; however this undermined the principle of voluntarism and was vetoed by Hoover. Parrish also emphasies that the "economic crisis required maximum co-operation between President and Congress". Roosevelt in his speech also recognizes that "the country needs" and "demands bold, persistent experimentation" in order to end the crisis. ...read more.

His criticism of business leaders is likely to be biased as he upholds left-wing ideas and is strongly against capitalism. Although it is true that banks did not want intervention in their regulations, it is important to recognize Hoover's lack of more direct intervention as he responsible for arranging adequate laws to improve the situation. Overall, Hoover attempted to improve the situation of the country. Most of his policies resulted in more disastrous effects than expected, such as the Hawley- Smoot Tariff, which damaged the economy further. However, he was the first president in American history to contribute in providing as much governmental relief for ordinary people. Historians recgonise his efforts to recover the market; however they also highlight his failures, which outweigh the positive aspects of his presidency. Despite his involvement his action was not sufficient enough to lift America out of the crisis. His main fault was his inability to detach himself from the principle of voluntarism and organize more direct governmental aid. Although some Hoover's ideas were practical, he did not have the right approach and application of them. Hence Hoover should be credited for his attempts to help the American economy, but at the same time he was responsible for not doing enough and letting the situation exacerbate further. ...read more.