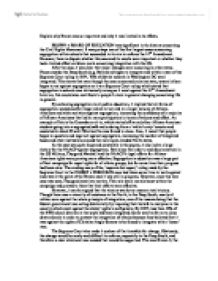 Explain why Brown was so important and why it was limited in its effects.

Explain why Brown was so important and why it was limited in its effects. BROWN v BOARD OF EDUCATION was significant in the history concerning the Civil Rights Movement. It was perhaps one of the first largest cases concerning segregation within schools that succeeded in its aim to enforce the 14th Amendment. However, there is dispute whether this case and its results were important or whether they had a limited effect on future work concerning integration with the US. After the case, it was clear that major changes were occurring in other states. Places outside the Deep South (e.g. Baltimore) began to integrate and within a year of the Supreme Court ruling in 1954, 70% of district schools in Washington DC were integrated. This shows that even though the case concerned only one state, several others began to act against segregation as it as a Supreme Court ruling which stated that segregation in schools was intrinsically wrong as it went against the 14th Amendment. ...read more.

Segregation in education was a large part of their campaign for equal rights for all ethnic groups, but for some time their progress had been slow. The eroding away of the, 'separate but equal,' ruling made by the Supreme Court in the PLESSY v FERGUSON case had taken some time to work against and even at the point of the Brown case it was still in progress. However, once this new case was seen, Thurgood went into motion. This win was a morale boost within the campaign and proved to them that their efforts were effective. However, it can be argued that the victory was by no means a total victory. Though there was a minority of resistance in the North, in the Deep South, nearly all whites were against the whole principle of integration, one of the reasons being that the federal government was acting dictatorially by imposing their beliefs to everyone in the country which went against the states' rights to self govern. ...read more.

As President Eisenhower did very little to enforce the verdict, it meant that the Southern states felt as if he did not agree with ethnic equality. However, he was seen as a man willing to fight for equal rights for all, but he was reluctant and afraid to encourage opposition of any form in the South. Though he said very little about the Brown verdict, what he did say was negative: that he regretted making Earl Warren Chief Justice of the Supreme Court; he doubted the ability of legislation changing the minds and hearts of the people; and even though he was Commander-in-Chief of the armed forces he did not use this power to impose the verdict because he said that using force would have a negative effect and was, 'just plain nuts'. To conclude, it is clear that there are many reasons as to why the BROWN v BOARD OF EDUCATION verdict was important to the Civil Rights Movement. However, the limitations of how the verdict was imposed clearly limited its effects on the country at the time. ...read more.