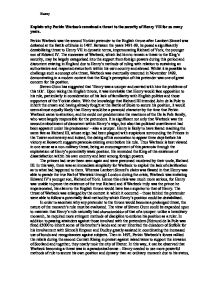 Explain why Perkin Warbeck remained a threat to the security of Henry VII for so many years.

Explain why Perkin Warbeck remained a threat to the security of Henry VII for so many years. Perkin Warbeck was the second Yorkist pretender to the English throne after Lambert Simnel was defeated at the Battle of Stoke in 1487. Between the years 1491-99, he posed a significantly destabilising threat to Henry VII in dynastic terms, impersonating Richard of York, the younger son of Edward IV. The successes of Warbeck, which led him to remain a threat to the King's security, may be largely categorised into the support from foreign powers during this period and discontent existing in England due to Henry's methods of ruling with relation to sustaining an authoritative and respected status both within his own country and abroad. Whilst it is possible to challenge such a concept of a threat, Warbeck was eventually executed in November 1499, demonstrating in a modern context that the King's perception of this pretender was one of great concern for his position. Steven Gunn has suggested that 'Henry was a usurper and carried with him the problems of this title'. ...read more.

Hence this crisis was much more serious, for Henry was unable to prove the existence of the true Richard and if Warbeck truly was the prince he impersonated, his claim to the English throne would have been superior to that of Henry. The threat of Warbeck was enlarged by the context in which it occurred - those behind the pretender were able to follow a potentially fatal method by which Henry's position could be destabilised. In order to ascertain why any pretender to the throne would become a prolonged threat, the nature of the monarch's rule must be evaluated. The view of Steven Gunn could be expanded upon to maintain that Henry's rule naturally had characteristics of that of a usurper: unlike a hereditary monarch, he required more stringent methods of discipline to enforce his position as a ruler. In addition to passing attainders against those involved with the pretenders (Edmund de la Pole was fined �5000 to inherit some of his brother's lands and never inherited the dukedom of Suffolk for his involvement with Simnel) ...read more.

However, in this respect, it must be noted that the threat was not Warbeck as an individual, but rather the concept of the proceedings and those supporting him. He became a focus for French discontent with Henry VII in the same way that he had been a Yorkist focus in England. A prolonged threat from any pretender to any throne can always be attributed to discontent with a monarch's rule. Conformingly, Perkin Warbeck was often able to exploit this to enlist support and increase opposition to the King. It is clear that the level of foreign support given to the pretender ultimately was the greatest contributing factor in threatening Henry's security due to the possibility of a successful invasion, though the paranoia and the methods of rule enlisted to secure his dynasty were equal factors in causing Warbeck to remain a threat. In contrast, it is very significant that Warbeck was never a primary threat as an individual, but merely a strong secondary threat behind the foreign powers and nobility that supported him - it was the concept that destabilised the position of Henry VII. ?? ?? ?? ?? History ...read more.