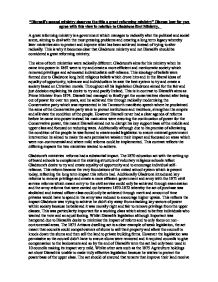 Disraeli's second ministry deserves the title a great reforming ministry Discuss how far you agree with this view in relation to Gladstone first Ministry.

"Disraeli's second ministry deserves the title a great reforming ministry" Discuss how far you agree with this view in relation to Gladstone first Ministry. A great reforming ministry is a government which manages to radically alter the political and social scene, aiming to deal with the most pressing problems and creating a long term legacy whereby later ministries aim to protect and improve what has been achieved instead of trying to alter radically. This is why it becomes clear that Gladstone ministry and not Disraeli's should be considered a great reforming ministry. The aims of both ministries were radically different. Gladstone's aims for his ministry when he came into power in 1867 were to try and create a more efficient and meritocratic society which removed privileges and advocated individualistic self-reliance. This ideology of beliefs were formed due to Gladstone long held religious beliefs which drove him and in the liberal ideas of equality of opportunity, tolerance and individualism he saw the best system to try and create a society based on Christian morals. Throughout all his legislation Gladstone aimed for the fair and just decision explaining his desire to try and pacify Ireland. This is in contrast to Disraeli's aims as Prime Minister from 1874. Disraeli had managed to finally get the conservatives elected after being out of power for over ten years, and he achieved ...read more.

This was particularity important for a working class which aimed to be free individuals who wanted the vote and an equal footing. Whilst Disraeli's legislation although Important was hampered due to Disraeli's desire to minimise the impact of reform and to only focus on non-controversial areas. The 1875 Artisans dwelling act is a clear example of weak legislation, the act meant that councils could compel owners of slums to sell their property and allow the council to knock-down the slums and then sell the land to private building firms. However the legislation was permissive so the council didn't have to ensure slums were removed and it required councils to give compensation to the landowners and so by the end of Disraeli's term the act had only been used in 10 councils making its impact very mild. Whilst other acts such as the 1875 Agriculture holdings act show Disraeli is unable to make truly effective legislation because he wishes to protect the power base of the upper class. The act should of ensured that tenants that improve their land receive compensation but Disraeli made the act permissive and stated that if there was a condition in contract which stated the landowner didn't have to pay compensation then the landowner didn't have too. ...read more.

Also Gladstone failed in one of his key aims which was to pacify Ireland but he was the one of the few politicians who was truly trying to find a workable solution instead of coercion. Whilst Disraeli was voted out not because he had made a massive impact but because he was Prime Minister whilst the economy entered recession, this meant that his mild measure had even less impact and his expensive imperialistic aims were highly controversial. So due to the recession Disraeli failed to alleviate the condition of the people and his other aims meant his government appeared to stall resulting in his popularity dropping. Overall although his legislation was occasionally flawed the overall improvement and effect that Gladstone's ministry had on the country reflect a great reforming ministry. Gladstone's Liberal beliefs in meritocratic and individual society have become corner stones of British society reflecting the ministries long term impact and legislation such as the licensing act although unpopular at the time has only been amended never removed by later governments as they see the positive impacts of the restriction of alcohol. This reflected against Disraeli's achievement of mildly modify Gladstone's legislation and avoiding awkward decision domestically or trying to alter the status quo shows that his ministry cannot be considered a great reforming ministry. As such I disagree with the view that Disraeli's government was a great reforming government instead arguing that it was his predecessor Gladstone that was clearly the great reforming ministry. ...read more.