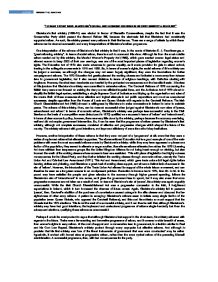 To what extent were Gladstones social and economic reforms in his first ministry a success?

'TO WHAT EXTENT WERE GLADSTONE'S SOCIAL AND ECONOMIC REFORMS IN HIS FIRST MINISTRY A SUCCESS?' Gladstone's first ministry (1868-74) was elected in favour of Disraeli's Conservatives, despite the fact that it was the Conservative Party which passed the Second Reform Bill, because the electorate felt that Gladstone had consistently supported reform. As such, his ministry passed many reforms in their first tenure. There are a range of criteria by which these reforms can be deemed successful, and many interpretations of Gladstone's reform programme. One interpretation of the reforms of Gladstone's first ministry is that it was, in the words of historian E. J. Feuchtwanger, a "great reforming ministry". In terms of social reform, there is much to commend this view. Although far from the most notable reform carried out by this ministry, the Married Women's Property Act (1869), which gave married women legal status and allowed women to keep �200 of their own earnings, was one of the most important pieces of legislation regarding women's rights. ...read more.

qualified as a success in terms of 'reform' and 'retrenchment'; in terms of clear economic policy, however, there was very little done by the ministry, perhaps because the economy was faring well and did not require government intervention. So, it can be seen that the programme of reform passed by Gladstone's first ministry, although not complete successes, consisted of effective and progressive changes which shaped the future of the country. The ministry reformed with good intentions, and improved efficiency of some the nation's key institutions. However, another interpretation of these reforms is that they were not part of a 'programme' at all; more that they were a series of unplanned reforms that alienated supporters. The aforementioned Education Act is a good example of one of the main problems with even the most successful reforms made by Gladstone's ministry: while they may have appeased or please one faction of the population, they served to alienate or anger another. Sometimes reforms alienated two sides: the 1872 Licensing Act drew criticism from temperance groups like the United Kingdom Alliance for not being harsh enough on drinking, but also incurred the wrath of the working classes whose access to beer was restricted. ...read more.

This is not the mark of a successful ministry, and it can thus be said that, although Gladstone's ministry may have had good intentions, the haphazard and unstructured programme of reforms single-handedly lost them the subsequent elections, qualifying these reforms as unsuccessful. Perhaps it would be most prudent to argue that although Gladstone lost support in the short-term, his ministry reformed with regards to the future. Theirs was a far-reaching and innovative programme of reform, and it covered a wide breadth of areas, from women's rights to army reform. At the cost of support and a consecutive term in government, in a fashion similar to Peel and his Corn Law Repeal, Gladstone's ministry pushed through many unpopular but effective reforms. And although to proclaim that his first ministry was 'one of the finest instruments of government that ever were constructed' may be rather hyperbolic, it worked with honest aims at progressive reform, rather than the more cynical reform of the preceding Disraeli administration. A successful programme, then, with bad consequences for the party. ?? ?? ?? ?? ...read more.