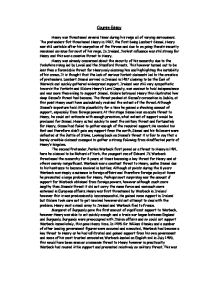 Henry was threatened several times during his reign all of varying seriousness. The pretenders fist threatened Henry in 1487, the first being Lambert Simnel.

Course Essay Henry was threatened several times during his reign all of varying seriousness. The pretenders fist threatened Henry in 1487, the first being Lambert Simnel. Henry was still unstable after his usurpation of the throne and due to on going threats security remained an issue for most of his reign. In Ireland, Yorkist influence was still strong for Henry and this was a massive threat to Henry. Henry was already concerned about the security of his monarchy due to the Yorkshire rising led by Lovell and the Stamford threats. This however turned out to be less then a formidable threat for Henry only alarming him and highlighting the instability of his crown. It is thought that the lack of serious Yorkist claimants led to the creation of pretenders. Lambert Simnel arrived in Ireland in 1487 claiming to be the Earl of Warwick and quickly gathered widespread support. Ireland was still very sympathetic towards the Yorkists and Kildare Henry's Lord Deputy, was anxious to hold independence and was more then willing to support Simnel. ...read more.

Henry was first threatened by Warbeck in Ireland however this is was predominantly inconsequential. He gained some support in Ireland but Kildare took care not to get involved however did not attempt to deal with the problem. Henry sent a small army to Ireland and Warbeck fled to France. Margaret of Burgundy gave the first amount of significant support to Warbeck, however Henry was able to act quickly enough and a trade war began between England and Burgundy. Burgundy were preoccupied with Italian affairs and so could not support Warbeck immediately, this gave Henry time. In 1495 Sir William Stanley and a number of other leading government figures were accused and executed, Warbeck had become a key threat to Henry as he had infiltrated and gained support from his own government and some of his most trusted associates. Warbeck landed on English soil in July 1495, this would have been seen as a immense threat to Henry however in practicality Warbeck had roused little support and presented relatively no military threat. ...read more.

Warbeck fled but was captured and imprisoned in the Tower. Both Simnel and Warbeck presented major threats towards Henry during the years 1485 -1499. The lack of true Yorkist claimants to the throne encouraged the uprising of pretenders, half the problem with pretenders was the fact that people believed it. Although Simnel and Warbeck were highly implausible they still gathered much support however Henry managed to quickly contest their every move. At the time Henry was unable to predict with any certainty the extent of any threat against him and therefore all threats were more serious to Henry. Although at the time major threats for Henry with hindsight many of Simnel and Warbecks threats were pathetic and lacking in support. Each threat nonetheless had its own level of seriousness, the most serious perhaps being Warbeck and James IV's threat together with the crucially timed Cornwall rising in 1485. What made all the threats more menacing was the intervention of foreign powers. In conclusion it is with out doubt that an immense threat was presented to Henry in the years 1485 onwards by the pretenders. ...read more.