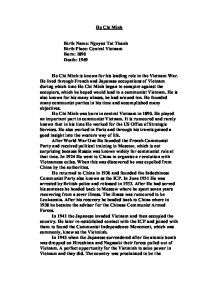 Ho Chi Minh Birth Name: Nguyen Tat Thanh Birth Place: Central Vietnam Born: 1890 Death: 1969 Ho Chi Minh is known for his leading role in the Vietnam War. He lived through French and Japanese occupations of Vietnam during which time Ho Chi Minh began to conspire against the occupiers, which he hoped would lead to a communist Vietnam. Ho is also known for his many aliases, he had around ten. Ho founded many communist parties in his time and accomplished many objectives. Ho Chi Minh was born in central Vietnam in 1890. He played an important part in communist Vietnam. It is rumoured and rarely known that in his time Ho worked for the US Office of Strategic Services. ...read more.

The illness was rumoured to be Leukaemia. After his recovery he headed back to China where in 1938 he became the adviser for the Chinese Communist Armed Forces. In 1941 the Japanese invaded Vietnam and then occupied the country. Ho later re-established contact with the ICP and joined with them to found the Communist Independence Movement, which was commonly, know as the Vietminh. In 1945 when the Japanese surrendered after the atomic bomb was dropped on Hiroshima and Nagasaki their forces pulled out of Vietnam. A perfect opportunity for the Vietminh to seize power in Vietnam and they did. The country was proclaimed to be the Democratic Republic of Vietnam and Ho became president. ...read more.

During this time Ho played more of a ceremonial role than anything else. The policy of the party was to be decided by others and the war raged on for many years. Ho Chi Minh otherwise know as Nguyen Tut Thanh or Nguyen Van Ba died on the 3rd of September 1969 of heart failure. In his honour after the Communist conquest of South Vietnam in 1975 Saigon was renamed Ho Chi Minh city. Throughout the world Ho is widely respected for his role in Vietnamese history. He is not only admired by those that benefited from the wars he won but also by those that he fought. He was regarded as a great leader of his armies, through wartime and what was once, his country. ...read more.