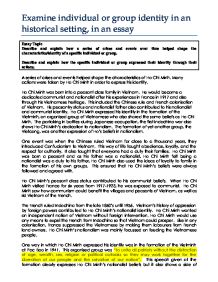 Vietnam. A series of crises and events helped shape the characteristics of Ho Chi Minh. Many actions were taken by Ho Chi Minh in order to express his identity.

Examine individual or group identity in an historical setting, in an essay Essay Topic Describe and explain how a series of crises and events over time helped shape the characteristics/identity of a specific individual or group. Describe and explain how the specific individual or group expressed their identity through their actions. A series of crises and events helped shape the characteristics of Ho Chi Minh. Many actions were taken by Ho Chi Minh in order to express his identity. Ho Chi Minh was born into a peasant class family in Vietnam. He would become a dedicated communist and nationalist after his experiences in France in 1917 and also through his Vietnamese heritage. This included the Chinese rule and French colonisation of Vietnam. His peasantry status and nationalist father also contributed to his nationalist and communist identity. Ho Chi Minh expressed his identity in the formation of the Vietminh, an organised group of Vietnamese who also shared the same beliefs as Ho Chi Minh. ...read more.

Ho Chi Minh's nationalism was mainly focussed on feeding the Vietnamese people. One way in which Ho Chi Minh expressed his identity was in the formation of the Vietminh at Pac Bao in 1941. This organised group was "to unite all patriots without the distinction of age, wealth, s*x, religion or political outlooks so they may work together for the Liberation at our people and the salvation of our nation". This speech given at the formation clearly expresses Ho Chi Minh's nationalist beliefs but it also shows a side of communism as he expresses his belief in equality. This group would use guerrilla style warfare in rural regions and was popular with the peasant class. With a militant force, Ho Chi Minh expressed his identity by using this force against the Japanese who occupied Vietnam later in 1941. Initially the Vietnamese welcomed the Japanese as they saw that fellow Asians were standing up to the west. ...read more.

His gearing Vietnam to war policy shows Ho Chi Minh was not content with a partitioned Vietnam. He wanted one unified country. Ho Chi Minh again showed his nationalism by organising the Vietcong. In the South of Vietnam, there was corruption in the Diem government. Ho combined the communists in the South with those who opposed Diem's regime into one group; the Vietcong. This of course was dominated with Ho Chi Minh's beliefs of communism and nationalism. In Vietnam during the earlier half of the 20th century, Ho Chi Minh, a dedicated nationalist and communist expressed his identity through the formation of like minded groups, the Vietminh and the Vietcong, as well as using military to free Vietnam of foreign powers. For example Ho Chi Minh used his forces against the Japanese in 1941, the French especially during 1948-1956 and the Battle of Dien Bien Phu. He was also influenced by his Vietnamese background; being a peasant and also being oppressed by the Chinese and French. These things helped shape Ho Chi Minh's identity of nationalism and communism. ...read more.