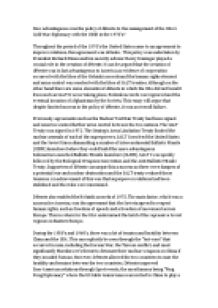 ï»¿How advantageous was the policy of détente to the management of the USA’s Cold War diplomacy with the USSR in the 1970’s? Throughout the period of the 1970’s the United States came to an agreement to improve relations, this agreement was détente. This policy was undertaken by President Richard Nixon and his security advisor Henry Kissinger played a crucial role in the creation of détente. It can be argued that the creation of détente was in fact advantageous to America as evidence of cooperation occurred with the likes of the Helsinki accords and the human rights element and arms control was reached with the likes of SALT treaties. Although on the other hand there are some elements of détente in which the USA did not benefit from such as SALT II never taking place, Helsinki accords were ignored and the eventual invasion of Afghanistan by the Soviets. This essay will argue that despite limited success in the policy of détente, it was an overall failure. ...read more.

During the 1950’s and 1960’s, there was a lot of tension and hostility between China and the USA. This can explicitly be seen through the “hot wars” that occurred in Asia, including the Korean War, the Taiwan conflict, and most significantly Eisenhower’s threat to detonate their nuclear weapons on China if they invaded Taiwan. However, Détente allowed the two countries to ease the hostility and tension between the two countries. Détente improved Sino-American relations through Sport events, the most famous being “Ping Pong Diplomacy” where the US table tennis team was invited to China to play a friendly table tennis competition. Eventually rapprochement was created between the USA and China and indirectly this benefitted the relations between the USSR and the USA. It is questionable whether China was a superpower or not, regardless, they were still a powerful nation. As the USA has improved relations with this powerful nation the USSR became threatened, therefore a key factor in the USSR’s decision to improve their relations with the USA. ...read more.

The invasion of Afghanistan marked the end of Détente whilst the USA responded with the “Carter doctrine”, which was the U.S intervention in the Persian Gulf if the Soviets threatened its interests there. Additionally, President Carter responded to the USSR actions by refusing to approve SALT II, stopping all electronic exports to the Soviet Union and forbidding US athletes to participate in the 1980 Moscow Olympic Games. Whilst there had been very obvious successes during Détente, this brief period of relaxation of tension cannot be viewed as an overall success. Initially détente started off well with the agreements of the SALT treaty and Helsinki accords. For a short time it did reduce tensions between the two nations and a threat of nuclear war, but this was very brief and weak policy. As mentioned, little was achieved in the SALT treaty, and SALT II never actually took place. It can be interpreted that the Soviets used détente for their success, using their policy to gain access to Western technology (Helsinki trade agreements) and after Détente occurred, the American’s under Reagan’s leadership, took a very hardline approach to the Soviet Union. ...read more.