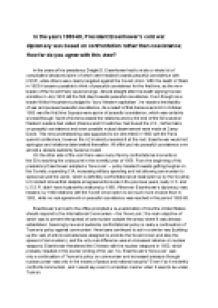 In the years 1953-60, President Eisenhowers cold war diplomacy was based on confrontation rather than coexistence; How far do you agree with this view?

﻿In the years 1953-60, President Eisenhower?s cold war diplomacy was based on confrontation rather than coexistence; How far do you agree with this view? In the years of his presidency Dwight D. Eisenhower had to make a whole lot of complicated decisions some of which were headed towards peaceful coexistence with USSR, while others were clearly targeted against the Soviet Union. With the death of Stalin in 1953 it became possible to think of peaceful coexistence for the first time, as the new leader of the Soviet Party would emerge. Almost straight after his death signing Korean armistice in July 1953 did the first step towards peaceful coexistence. Even though new leader Nikita Khrushchev pledged to ?bury Western capitalism?, he rejected inevitability of war and pursued peaceful coexistence. As a result of that Geneva summit in October 1955 was the first time Superpowers spoke of peaceful coexistence, which was certainly a breakthrough. Spirit of Geneva eased the relations and by the end of the 50?s several Western leaders had visited Moscow and Khrushchev had toured the U.S., further talks on peaceful coexistence and even possible mutual disarmament were made at Camp David. This new understanding was supposed to be cemented in 1960 with the Paris summit conference, however the U2 incident preceded it at the root. Eisenhower would not apologize and relations deteriorated thereafter. All effort put into peaceful coexistence over almost a decade suddenly became invalid. ...read more.

The ?Spirit of Geneva? eased tensions between the Soviets and the United States even though the conference failed to produce any significant agreements. Khrushchev refused to accept Eisenhower?s ?open sky?s? initiative, but regardless to that Eisenhower would start U2 flights, which will lead to an incident in 1960. Eisenhower is acting only in the interests of his own country, not willing to compromise with the Soviets, ready to break his word. ?Peaceful coexistence? did not extend to Eastern Europe. In November 1956, Soviet tanks ruthlessly suppressed Hungarian uprising. American propaganda agencies such as Radio Free Europe and the Voice of America had encouraged Eastern Europeans to resist. Yet Eisenhower decided not to take action to aid the Hungarian freedom fighters since any intervention carried the risk of a U.S.-Soviet war that could lead to a nuclear exchange. Eisenhower hoped to achieve a detente with the Soviet Union and hopes rose after Khrushchev visited the United States in September 1959 and met with Eisenhower at the presidential retreat in the Maryland Mountains where they spoke of ?peaceful coexistence? and possible mutual disarmament. This summit produced no arms control agreement, but it did lead to good will and optimism known as ?the spirit of Camp David?. Khrushchev invited Eisenhower to Russia and they agreed to meet again in Paris in May 1960 to cement their understanding. The summit collapsed, however, due to the dispute over the U-2 incident. As the meeting with Khrushchev approached Eisenhower authorized another U-2 flight over Soviet territory. ...read more.

England, France and Israel decided to send troops there. Eisenhower was outraged. He thought the attacks would only strengthen Nasser, allowing him to become the champion of the Arab world as he opposed the aggressors. Eisenhower quickly condemned the attacks and used U.S. diplomatic and economic power to force all three nations to withdraw their troops. United States prestige in the Middle East rose. But Eisenhower hardly made good use of this advantage, as he announced a new program, known as the Eisenhower Doctrine, to provide economic and military aid to Middle Eastern nations facing Communist aggression. This Doctrine was welcomed by Lebanon and Saudi Arabia but denounced by Egypt and Syria as American plot to dominate the world. Used once in '58 when American troops went into Lebanon and protected government against Egyptian rebels. In conclusion I would like to say that despite all little steps made towards peaceful coexistence it all was really confrontational and both Eisenhower and Khrushchev understood this, playing their little coexistence game just to show that they are good (they are trying to coexist) and others are bad (this propaganda was massively used in both countries: Americans were saying that Soviets are the aggressors and vise versa). There were no real agreements made on coexistence while Eisenhower was constantly acting confrontationally towards communism throughout his office. He was not ready or willing to step into real conflict as it could lead to world destruction, but pinching the Soviets when he had a chance to do so. In my judgment, yes, Eisenhower?s cold war diplomacy was based on confrontation. ...read more.