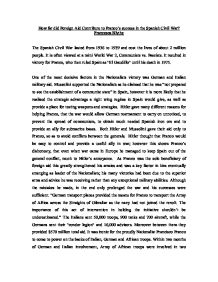 How far did Foreign Aid Contribute to Franco's success in the Spanish Civil War?

How far did Foreign Aid Contribute to Franco's success in the Spanish Civil War? Francesca Blythe The Spanish Civil War lasted from 1936 to 1939 and cost the lives of about 2 million people. It is often viewed at a mini World War 2, Communists vs. Fascists. It resulted in victory for Franco, who then ruled Spain as "El Gaudillo" until his death in 1975. One of the most decisive factors in the Nationalists victory was German and Italian military aid. Mussolini supported the Nationalists as he claimed that he was "not prepared to see the establishment of a communist state" in Spain, however it is more likely that he realised the strategic advantage a right wing regime in Spain would give, as well as provide a place for testing weapons and strategies. Hitler gave many different reasons for helping Franco, that the war would allow German rearmament to carry on unnoticed, to prevent the spread of communism, to obtain much needed Spanish iron ore and to provide an ally for submarine bases. Both Hitler and Mussolini gave their aid only to Franco, so as to avoid conflicts between the generals. ...read more.

"The frictions in the Republic reached boiling point several times, with a large scale fighting taking place in Barcelona between the anarchists and Republican government in May 1937 and a civil war within a civil war erupting in the Republic in the last few weeks of the war." The Republican armies were often poorly equipped and poorly disciplined, it was only the introduction of Soviet technicians that started to train the military properly, and ideological differences often hindered their efforts. This was especially the case when training the anarchists who often refused to dig trenches or use maps as they believed it cowardly yet who would often flee under heavy shelling or bombardment. The Republics main source of aid was the USSR, which also resulted in it being tied to it ideologically, with the communist party receiving orders often direct from Moscow. Russian aid was of a much higher quality than German or Italian aid, for example in the first use of Russian arms, one T26 destroyed 11 Italian tanks, however this was due to their well trained Russian operators, Spaniards operated them with much less success. The dependence of the Republic on the USSR for aid and the propaganda of the Nationalists portraying the Republic as "Red" prevented other countries from ...read more.

As well as his desire to create a "fight to the death" war. For the Nationalists terror was part of their campaign. "It is borne in mind that are action will need to be very violent in order to crush a strong and well organised enemy as soon as possible." (General Mola) However it is hard to assess the effect of terror as a weapon of war. At first it may have stiffened Republican resistance, but later, when their morale was lower, contributed to defeatism. It is difficult to draw definite conclusions however, the outcome of the war was massively promoted by interventions of foreign states, in the first place by the military support of Germany and Italy, secondly by the appeasement-policy of France and Great Britain and thirdly by the anti-anarchistic attitude of Russia. But if the Republicans had been stronger and more of a united body would the outcome still have been the same? I think the reasons for Franco's success were due to the vast amounts of foreign aid complemented by the weakness of the Republic. Without the aid it may not have been such a "walkover". 1 The Encyclopaedia Britannica ?? ...read more.