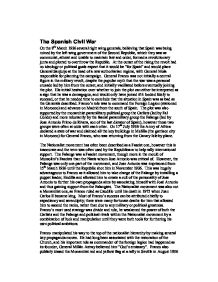 The Spanish Civil War On the 8th March 1936 several right wing generals, believing that Spain was being ruined by the left wing government of the Second Republic, which they saw as communist, atheist and unable to maintain law and order, formed a revolutionary junta and plotted to overthrow the Republic. At the outset of the rising the revolt had no ideology or political goals expect that it would be "for Spain" and would place General Sanjurjo at the head of a new authoritarian regime, with General Mola responsible for planning the campaign. General Franco was not initially a central figure in the military revolt, despite the popular myth that the war was a personal crusade led by him from the outset, and initially vacillated before eventually joining the plot. His initial hesitation over whether to join the plot can either be interpreted as a sign that he was a demagogue, and would only have joined if it looked likely to succeed, or that he needed time to conclude that the situation in Spain was as bad as the Generals described. Franco's role was to command the Foreign Legion (stationed in Morocco) and advance on Madrid from the south of Spain. The plot was also supported by the monarchist paramilitary political group the Carlists (led by Fal Conde) ...read more.

Franco was made Head of State on 1st October 1936 as well as Generalissimo of the army, giving the Nationalists one leader and a figurehead, an important consideration for propaganda purposes- the Nationalists slogan became "One State, One Country, One Chief" (p424 Thomas) as well as strengthening the Nationalists by reducing internal divisions. The Republic never achieved anywhere near this level of unity, resulting in them being significantly weaker militarily. One of the most decisive factors in the Nationalists victory was German and Italian military aid. Mussolini supported the Nationalists as he claimed that he was "not prepared to see the establishment of a communist state" in Spain (Thomas p353), however it is more likely that he realised the strategic advantage a right wing regime in Spain would give, as well as provide an arena for testing weapons and strategies. Hitler gave many different reasons for helping Franco, that the war would allow German rearmament to carry on unnoticed, to prevent the spread of communism, to obtain much needed Spanish iron ore and to provide an ally for submarine bases. Both Hitler and Mussolini gave their all their aid only to Franco, so as to avoid conflicts between the generals. Hitler thought that Franco would be easy to control and provide a useful ally in war; however this shows Franco's duplicity, that even when war came in Europe he managed to keep Spain out of the general conflict, much to Hitler's annoyance. ...read more.

Many of the soldiers of the IBs had been na�ve about war and were not ready for it, resulting in increasing levels of desertion and dissatisfaction, weakening the Republican army further. Franco was not a great military leader but rather a Machiavellian manipulator who was often in the right place at the right time and who was often very lucky. He never commanded any battles through the whole war, instead giving field command to generals he knew could never be a political rival. Thomas argues that Franco treated all the Nationalist political groups as "divisions", to be used to obtain a goal as one would use a division of troops to obtain a military goal (p931). It is unlikely that Franco would have become the leader of the Nationalists had Sanjurjo not been killed. Franco was also not a great military general as is often made out, but in fact was responsible for several blunders (such as at the Battle of Guadalajara and at Toledo) and won the war chiefly due to the large amount of German aid he received (the Italians were of little help) and the weaknesses of the Republic. The support of the church was also a critical element in Franco's victory; the movement had from the outset portrayed itself as a religious one fighting against the godlessness of the "red" Republic and ensured the support of the middle classes and the latifundi (large estate owners). ...read more.