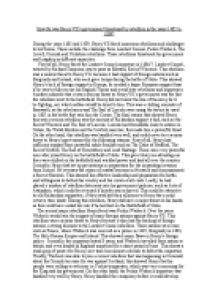 How far was Henry VIIs government threatened by rebellion in the years 1485 to 1509?

﻿How far was Henry VII?s government threatened by rebellion in the years 1485 to 1509? During the years 1485 and 1509, Henry VII faced numerous rebellions and challenges to his throne. These include the challenge from Lambert Simnel, Perkin Warbeck, The Lovell, Cornish and Yorkshire rebellions. These rebellions threatened his government and kingship in different capacities. First of all, Henry faced the Lambert Simnel imposture in 1486/7. Lambert Simnel, tutored by Richard Simmons, was to pose as Edward, Earl of Warwick. This rebellion was a serious threat to Henry VII, because it had support of foreign nations such as Burgundy and Ireland, who each gave troops during the battle of Stoke. This showed Henry?s lack of foreign support in Europe, he needed a larger European support base if he was to fully secure his English Throne and avoid later rebellions and impostures. Another indicator that it was a serious threat to Henry VII?s government was the fact the rebellion went to the battlefield. Henry did not know the size of the army he?d be fighting, nor which nobles would be loyal to him. ...read more.

This showed his effective leadership and preparation for battle, and willingness to defend his country and his crown at all costs. Lastly, he had placed a number of rebellion deterrents into his government policies, such as Acts of Attainders, which could be reversed if loyalty was achieved. This could be attractive to old Richardian supporters; if they switched their alliances to Henry they could retrieve their lands. During this rebellion, Henry did have a major threat on his hands, as this could have ended his rule if he had lost on the Battlefield at Stoke. The second major rebellion Henry faced was Perkin Warbeck. Over the years Warbeck would win the support of many foreign nations against Henry VII. This rebellion was a serious threat to Henry because it also had the backing of foreign nations, a strong likeness to the Lambert Simnel rebellion. These nations were ones such as France, where Warbeck was received as a prince in 1492, Burgundy in 1493, The Holy Roman Empire and Ireland. This showed major flaws in Henry?s foreign policy. ...read more.

The third major rebellion threat to Henry VII and his government was the Lovell rebellion in 1486. This was threat in a way because it showed Yorkist support was still significant in some nobles, such as Francis, Viscount Lovell and the Stafford Brothers who tried to lead the rebellion. Another reason it was a minor threat is because it showed flaws in government policies such as sanctuary harbouring criminals of treason. Thirdly, it showed some nobles could not be trusted, and that Henry must be careful who he entrusts with titles and power. On the other hand, this rebellion was not a threat because there was no imposture involved which could threaten Henry?s crown. Secondly, the nobles involved in the rebellion were only minor noblemen, so did not have large amounts of power or retained men at their command. Thirdly, Henry knew exactly how to deal with the situation to try and deter others from rebelling by executing one of the Stafford Brothers, and sparing the other, showing merciful kingship. To some extent, Henry had these rebellions under control, with the help of loyal nobles, but overall he and his government were very threatened by rebellions from Yorkist supporters between the years of 1485 and 1509. ...read more.