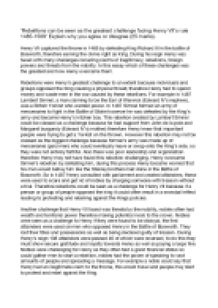 Rebellions can be seen as the greatest challenge facing Henry VIIs rule 1485-1509 Explain why you agree or disagree (25 marks).

﻿?Rebellions can be seen as the greatest challenge facing Henry VII?s rule 1485-1509? Explain why you agree or disagree (25 marks). Henry VII captured the throne in 1485 by defeating King Richard III in the battle of Bosworth, therefore earning the divine right as King. During his reign Henry was faced with many challenges including claims of illegitimacy, rebellions, foreign powers and threats from the nobility. In this essay which of these challenges was the greatest and how Henry overcame them. Rebellions were Henry?s greatest challenge to an extent because individuals and groups opposed the King causing a physical threat; therefore Henry had to spend money and waste men in the war caused by these rebellions. For example in 1487 Lambert Simnel, a man claiming to be the Earl of Warwick (Edward IV?s nephew), was a British Yorkist who wanted power. In 1487 Simnel formed an army of mercenaries to fight in the Battle of Stoke however he was defeated by the King?s army and became Henry?s kitchen boy. This rebellion created by Lambert Simnel could be classed as a challenge because he had support from John de la pole and Margaret burgundy (Edward IV?s) ...read more.

Nobles were seen as a challenge to Henry if they were found to be disloyal, the first attainders were used on men who opposed Henry in the Battle of Bosworth. They lost their titles and possessions as well as being declared guilty of treason. During Henry?s reign 138 attainders were passed 46 of which were reversed, to do this they must show secure gratitude and loyalty towards Henry as well as paying a large fine. Nobles were challenging for Henry as they often had a good financial status so could gather men to start a rebellion, nobles had the power of speaking to vast amounts of people and spreading a message. For example a noble could say that Henry had an illegitimate claim to the throne, this would travel and people may start to protest and rebel against the King. Many people argued that Henry VII had no or very little claim to the throne. However Henry argues that he had a legitimate claim to the crown as his mother was Margaret Beaufort and his father was Edmund Earl of Richmond both of his parents came from the John of Gaunt line, therefore his mother?s heritage meant he had a link to the throne and was able to successfully become king. ...read more.

Although this was a main factor for defending Brittany, Henry also knew that the invasion could have a massive impact on England. As if France was to capture Brittany then Calais would become more vulnerable causing disruptions in trade between England and France, this could also leave the south coast of England in a weaker military position. England's relationship with France was seen as a challenge for Henry as the country?s internal division could impact his own country and its citizens, in order to avoid attacks from other countries Henry introduced a series of truces between 1485 and 1492 with neighbouring countries that could potentially pose a threat. In conclusion rebellions can be seen as Henry?s greatest challenge because he often wasted men as well as money on the attacks from rebellions and if a person or group of people opposed the king it could result in a snowball effect leading to protesting and rebelling against the Kings policies. However other factors imposed threats as well as challenges Henry?s reign, this included controlling the nobility to avoid uprising, proving the legitimacy of his claim to the thrown and maintaining a civil relationship with neighbouring countries to benefit his own country. ...read more.