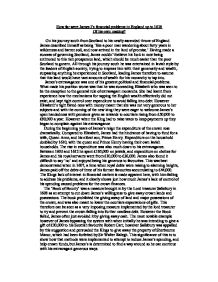 How far were James I's financial problems in England up to 1618 Of his own making?

How far were James I's financial problems in England up to 1618 Of his own making? On his journey south from Scotland to his newly ascended throne of England James described himself as being 'like a poor man wandering about forty years in wilderness and barren soil, and now arrived in the land of promise.' Having made a success of governing Scotland, James couldn't believe his luck in now being enthroned to this rich prosperous land, which should be much easier than the poor Scotland to govern. All through his journey south he was entertained in lavish style by the leaders of English society, trying to impress him with their generosity and wealth, surpassing anything he experienced in Scotland, leading James therefore to assume that this land would have vast amounts of wealth for his monarchy to tap into. James's extravagance was one of his greatest political and financial problems. What made his position worse was that he was succeeding Elizabeth who was seen to be the exception to the general rule of extravagant monarchs. She had learnt from experience how the mechanisms for tapping the English wealth effectively did not exist, and kept tight control over expenditure to avoid falling into debt. However Elizabeth's tight fisted-ness with money meant that she was not very generous to her subjects and with the coming of the new king they were eager to welcome James's open handedness with pensions given as rewards to courtiers rising from �50,000 to �80,000 a year. ...read more.

This significance of this is to show how that methods were implemented to attempt to reduce James's spending, and help crown funds, but James's is determined to find a way around so he can continue with his extravagant generous ways. The income received by the King was called ordinary revenue. The main source of income from this was that received from the crown lands. However these had much depleted in value, as land had been sold off to get more money for the crown and also the lands pries had failed to raise with inflation and were now 60% below market price. The possibility for the crown to maximise revenue from lands however was not practical as extracting economic rents was unpopular and the crown lands were a convenient form of patronage. Therefore as the significance of crown lands depleted leading the King into further financial trouble, the revenue from customs became highly important. There were however also problems with the use of wardship, where the crown could take land where the owner had died and there was not suitable owner. The problems were that the courts often used these lands as rewards for courtiers, who would enrich themselves at the estates expense. The problem came because people began to turn against the system, because wardship for more than a generation could bring about ruin for the family who owned the land, and there were calls to an end of the system, which brought in �65,000 a year. ...read more.

Before the scheme, cloth was exported by merchant adventurers to Holland, where they finished the cloth and sold it on to Europe and the East adding value. The idea of Cockayne was that they would finish the cloth in England and sell it on so that the English made the profit and Cockayne would monopolise the market, the King agreed to this scheme. The problem was that there was no instant market for the finished cloth, and England did not have the infrastructure to export the cloth. Also they did not have the resources to finish the cloth. The problem spiralled as the cloth industry was often reliant on pay at the end of each day, and they workers could not receive this. So when Cockayne tried to restore the other ways there was not the money to return. The consequence was a huge failure and riots, with large-scale social unrest in the cloth producing areas. By 1614 the crown treasury was in bad debt, and they had to resort to new measures of increasing finance. One of these was the sale of honours, and the King invented the term baronetcy, and sold it, which gave a place in the House of Lords. However in the long term this presented problems in that the price people were willing to pay for titles fell as they were getting more common, and the genuine noblemen became offended. So once again a financial scheme of the courts bringing social problems for the King. James's extravagance was undoubtably one of the ...read more.