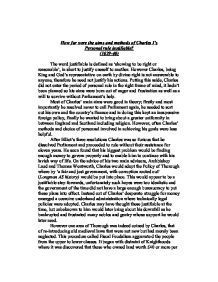 How far were the aims and methods of Charles I's Personal rule justifiable? (1629-40)

How far were the aims and methods of Charles I's Personal rule justifiable? (1629-40) The word justifiable is defined as 'showing to be right or reasonable', in short to justify oneself to another. However Charles, being King and God's representative on earth by divine right is not answerable to anyone, therefore he need not justify his actions. Putting this aside, Charles did not enter the period of personal rule in the right frame of mind, it hadn't been planned so his aims were born out of anger and frustration as well as a will to survive without Parliament's help. Most of Charles' main aims were good in theory; firstly and most importantly he resolved never to call Parliament again, he needed to sort out his own and the country's finance and in doing this kept an inexpensive foreign policy, finally he wanted to bring about a greater uniformity in between England and Scotland including religion. However, often Charles' methods and choice of personnel involved in achieving his goals were less helpful. After Elliot's three resolutions Charles was so furious that he dissolved Parliament and proceeded to rule without their assistance for eleven years. ...read more.

The re-introduction of old laws such as these could not be completely justified, however it was deemed necessary by Charles and his advisors in order for the country to be governed appropriately and for the monarchy to survive. It was technically legal although the damage he was doing to his relationship with the upper class was irreversible. The middle lower and working class were also hit hard by Charles' need for money. The most controversial of these taxes was the collection of ship money from inland areas as well as coastal towns, it also became an annual tax whereas it had usually only been collected during times of war. John Hapton tried a test case, he lost when it was said "Defence is a matter for all and should be paid by all." However there was popular support for him showing that the people thought Charles was being unreasonable and his actions unjustifiable, despite it being legal. To add to this monopolies were placed on products such as salt, which was of uttermost importance in order to keep meats fresh. This combined with the already spiralling high prices due to increased population and poor agriculture led to bad blood between the people and their king. ...read more.

Fortunately Charles didn't take this advice, which would have caused outcry in England. Wentworth was later used as a scapegoat by parliament and executed in 1941. In my opinion Charles was far from being justified in attempting to bring about changes in the Scottish Church particularly as it took him over five years to find the time for his coronation. In truth some of Charles' aims were justifiable despite them being made out of anger, however some were just selfish and had a lot to do with pride. He was King and wanted to show Parliament that he didn't need their help to govern his kingdom. Charles in fact did set out with the best of intentions unfortunately he had neither the know how, nor the leadership to devise the best methods in which to achieve his goals. He was also a bad judge of character and continually surrounded himself with incompetent and stubborn advisors such as Laud and Wentworth. Although the people thought Charles to be unjustifiable in his actions he was indeed king and therefore he had the power and authority to do what he thought best in the interests of his country. To conclude, in my opinion Charles did not need to justify himself to the people or even parliament only to himself. ...read more.