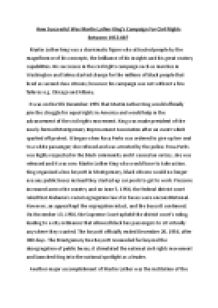 How Successful Was Martin Luther Kings Campaign For Civil Rights Between 1955-68?

﻿How Successful Was Martin Luther King?s Campaign For Civil Rights Between 1955-68? Martin Luther king was a charismatic figure who attracted people by the magnificence of his concepts, the brilliance of his insights and his great oratory capabilities. His successes in the civil rights campaign such as marches in Washington and Selma started change for the millions of black people that lived as second class citizens; however his campaign was not without a few failures e.g. Chicago and Albany. It was on the 5th December 1955 that Martin Luther King would officially join the struggle for equal rights in America and would help in the advancement of the civil rights movement. King was made president of the newly-formed Montgomery Improvement Association after an event which sparked off protest. It began when Rosa Perks was ordered to give up her seat to a white passenger; she refused and was arrested by the police. Rosa Perks was highly respected in the black community and it caused an outcry, she was released and it was now Martin Luther King who would have to take action. ...read more.

This show of brutal force against the peaceful protestors was captured by the media who had followed the protest; these images were now played all over America exposing the treatment of black Americans in the southern states. The results of this protest not only began to increase the white sympathy given to the civil rights movement, but also resulted in Kennedy being forced to make Governor Wallace of Alabama release protestors and begin implementing changes towards desegregating Birmingham. However, it may be argued that as Kennedy was not a great proprietor of civil rights he only did this due to mounting pressure from the media coverage. In the same year King also organised an even grander march on Washington, where he wanted to go and demand Kennedy pass a civil rights bill. 200,000 black Americans and 50,000 white Americans took part in this, demonstrating not only the desire for change by the black community but also the sympathy given by the white community. ...read more.

This time it was half way through the march that it was ended, when King compromised with authorities who were protecting protestors to turn the march around and go back. Not only did the idea of this march to raise voting registration in some of the lowest areas of the south, but it also lost King a large majority of the black extremists. As they were becoming increasingly frustrated with the movement, and saw King compromised with the authorities as a surrender and sign of weakness. It was finally after King had ended de Jure segregation that he moved his focus to the northern issues, however his tactics of non-violence to gain a violent reaction would no longer work. Martin Luther King has become synonymous with the success of the civil rights movement and this is well justified with the great impact he made in America with marches in Alabama and being the youngest ever recipient of the Nobel peace prize. Although towards the end of the campaign King also had some failures, most present upon his move to the northern states and the issues that posed for him. ...read more.