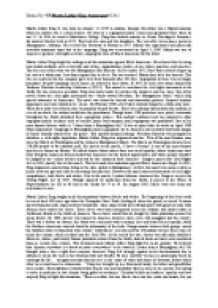 Martin Luther King. Martin was one of Americas greatest civil rights activists, shaping the lives of Black Americans for the better.

﻿Denise Uy 9IRMartin Luther King Assessment4/12/11 Martin Luther King Jr. was born on January 15, 1929 in Atlanta, Georgia. His father was a Baptist minister while his mother was a school teacher. He went to a segregated public school and graduated there when he was 15. In 1944, he went to Morehouse College. King then studied ministry in Crozer Theological Seminary. He married Coretta Scott in 1953. They had two sons and two daughters. The year after, he became a pastor in Montgomery, Alabama. He received his doctorate in Boston in 1955. Martin was imprisoned and physically assaulted numerous times due to the campaign. King was assassinated on April 4, 1968. Martin was one of America?s greatest civil rights activists, shaping the lives of Black Americans for the better. Martin Luther King fought for ending racial discrimination against Black Americans. He achieved this by using non-violent methods such as boycotts and strikes, organizations, books, sit-ins, letters, marches, and speeches. The first successful event was the Montgomery Bus Boycott. On December 1955, Rosa Parks refused to give up her seat to a white man. Law then required her to do so. She was arrested. Martin then led a bus boycott. This was successful as the bus company gave in to their demands after 382 days. Segregation in buses was no longer permitted. Despite bombings on his house, he refused to back down. In 1957, he and a few others formed the Southern Christian Leadership Conference (SCLC). ...read more.

Lincoln used the US military to force these states to rejoin the country, which resulted into the Civil War. At the end of the war, slavery was officially abolished. However, whites, particularly former plantation owners from the South, looked down on blacks and considered them as second-class citizens. This treatment made Martin Luther King fight for racial equality. He believed that ?injustice anywhere is a threat to justice everywhere? as he stated in ?Letters from a Birmingham Jail.? He thought justice was a right that everyone deserved. King felt strongly against racial discrimination due to influences on his life such as his Christian faith and Gandhi. He once said that ?r****m is a philosophy based on contempt for life?. arrogant assertion that one race is the centre of value and object of devotion, before which other races must kneel in submission?? King was brought up in a Protestant family; his father and grandfather were pastors. His helpfulness towards fellow blacks was most probably why he chose to be a pastor over taking a career in medicine or law, despite being gifted at academics. Christian beliefs on kindness, equality and love inspired King to fight discrimination. ?There is neither Jew nor Greek, slave nor free, male nor female, for you are all one in Christ Jesus,? from Galatians (3:28) and ?Everyone is created in the image of God? from Genesis (1:27) all teach about equality. ...read more.

Gandhi said ?Forgiveness is the attribute of the strong,? and ?An eye for an eye makes the whole world blind.? He believed that repentance takes courage and that revenge could ruin the world. He also thought that the poor shouldn?t be mistreated because they did bad actions in their past life. Both successfully fought against oppression; Ghandi fought against the oppression of Indians while King fought against the oppression of blacks. Sadly, both spiritual leaders were assassinated. King was a global leader for human rights and justice. He was described as ?the first person in the Western world to have shown that a struggle can be waged without violence.? He received Man of the Year by TIME magazine in 1963, Nobel Peace Prize in 1964 and Presidential Medal of Freedom in 1977, which is the highest award an ordinary citizen could obtain. He was a man of equality and non-violence. His works, I Have a Dream and Letters from Birmingham Jail, were some of the most influential creations of all time, the latter being required reading in universities. His I Have a Dream speech is one of the most outstanding calls for freedom in history. Without him, the Civil Rights Movement wouldn?t have caused such an effect and might have been achieved so much later. Martin not only created a huge impact on the lives of Black Americans, he has also influenced global civil rights reforms today. His philosophy has been proven to be a successful solution against injustice. King is an outstanding figure, especially for people fighting for justice, peace, freedom and equality. ...read more.