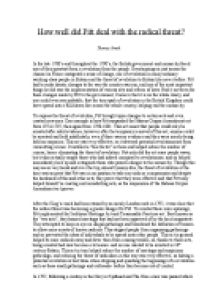 How well did Pitt deal with the radical threat?

﻿How well did Pitt deal with the radical threat? Thomas Smith In the late 1780?s and throughout the 1790?s, the British government and monarchy faced one of their greatest fears, a revolution from the people. Events going on just across the channel in France instigated a sense of change, one of revolution in many ordinary working-class people in Britain and the threat of revolution to Britain like never before. Pitt had to make drastic changes to the way the country was run, and one of the most important things he did was the implementation of various acts and reform of laws. Had it not been for these changes made by Pitt to the government, I believe that it is on the whole likely, and one could even say probable, that the tiny spark of revolution in the British Kingdom could have spread into a full-blown fire across the whole country, helping end the monarchy. To supress the threat of revolution, Pitt brought upon changes to certain acts and even created new ones. One example is how Pitt suspended the Habeas Corpus Amendment act from 1974-1795, then again from 1798-1801. This act meant that people could only be arrested after solid evidence, however after the temporary removal of this act, anyone could be arrested and held indefinitely, even if there was no evidence and they were merely being held on suspicion. This act was very effective, as it deterred potential revolutionaries from committing crimes. It instilled a ?fear factor? in them and helped reduce the number of crimes, hence eliminating the threat of revolution. ...read more.

Introduced in 1793, the Aliens act prevented French revolutionary agents from entering Britain, which was of course helpful for Pitt as it prevented ideas being spread onto people in Britain, which of course helped to decrease the potential popularity of revolution in Britain and so helped decrease the chances of it. Corresponding societies and left-wing newspapers also had to be dealt with by Pitt. Numbers of people joining corresponding societies all over the country were rising sharply due to an increasingly literate working class. This meant that they read pro-reform, anti-monarchy books such as ?The Rights of Man? by Thomas Paine, which only ?enhanced? and made their views on the monarchy and reform more extreme. One could say that the knowledge obtained by the working class by reading these books could have been a potential catalyst for the beginning of a revolution, and so Pitt had to act fast to stop the ?rebels? from reading about these revolutionary ideas. Although he did not close down the corresponding societies, and this could be seen as one of the things he failed to do, he managed to pass new laws that enabled the government to suppress and regulate newspapers, which meant that workers were not as exposed to pro-reform stories as they were before which helped reduce the ?brainwashing? of workers to try and overthrow the monarchy. This was very important for Pitt, as had the newspapers not become regulated and printed anything they liked, many of the workers would have become more radical, which would definitely have increased the threat of revolution in Britain as more workers would have become willing to rebel. ...read more.

Acts such as the ?Defence of The Realm Act?, the suspension of Habeas Corpus, the ?Two Acts? and the abolition of trade unions, as well as victory in propaganda and popularity with most of the civilians, and keeping the country from economic ruin, as well as other clever schemes amassed by Pitt, he helped to prevent the threat of radicalism and revolution in Britain. Yes, one could say that although he made some beneficial changes, it was the under-supported and not united radical movement (there was a north-south divide- those from the north were more in favour of change, and also the radicals were all split over aims), and the lack of a genuine public desire to overthrow a hated regime(unlike in France where the majority of the county were ?fed up? with the current regime, in Britain only a relatively small percentage of the population were keen on revolt), that was the main reason for Britain not going into the revolution. One could also say that although the changes were good, they were too harsh and caused there to be a reign of terror in Britain under the Pitt government which took away the freedom of people in Britain, which is something that would be very detrimental to the Pitt government. However it is my opinion that during the late 18th Century and early 19th Century, Pitt was in no position whatsoever to take any risks or compromises and despite the harshness of the schemes he introduced, they proved that they were extremely effective as, thanks to the changes he made to the government and country, Pitt had successfully managed to extinguished the threat of radicalism and revolution in Britain. Thomas Smith 6F3 ...read more.