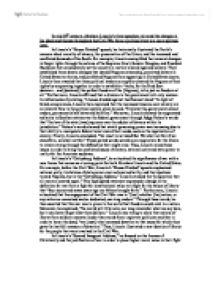 In mid 19th century, Abraham Lincoln's three speeches mirrored the changes in his ideals and themes throughout the Civil War from a political view to a more spiritual level.

In mid 19th century, Abraham Lincoln's three speeches mirrored the changes in his ideals and themes throughout the Civil War from a political view to a more spiritual level. In Lincoln's "House Divided" speech, he rhetorically illustrated the North's concern about morality of slavery, the preservation of the Union, and the increased and conflicted demands of the South. For example, Lincoln exemplified the immoral changes in Negro rights through the actions of the Supreme Court, Senator Douglas, and President Buchanan that coincidentally set the country in motion toward legalized slavery. They established three drastic changes that denied Negroes citizenship, permitted slavery in United States territories, and prohibited Negroes from appearing in United States courts. Lincoln then revealed that these political leaders corruptibly cheated the Negroes of their rights by cooperating together in order to establish a "niche, for the Dred Scot decision...and [declared] the perfect freedom of the [Negroes], to be just no freedom at all." Furthermore, Lincoln affirmed that a division in the government will only weaken its infrastructure by stating, "a house divided against itself cannot stand." In light of failed compromises, Lincoln then explained that the increased tensions over slavery are an inherent flaw in the political system when he said, "I believe this government cannot endure, permanently half slave and half free." ...read more.

Lincoln realized that both sides of the Civil War had a common belief that their side was righteous and that they prayed to the same God for different reasons. He then concluded that "the prayers of both could not be answered," and that one would be vindicated in their beliefs for the war and one would not. Furthermore, he then prayed to God in his speech in hopes that they were on God's side and that their fight for liberty, freedom, and justice was justified in God's eyes. He asked God "to give us to see the right, let us strive on and finish the work we are in; to bind up the nation's wounds." These words showed that Lincoln wanted to see the right that would lead to greater goodness for the country and with the help of God to be able to end the war. Finally, Lincoln said, "The judgments of the Lord are true at the righteous altogether." This statement explained that any events that occur only happen due to God's belief that they should arise. Thus, Lincoln affirmed that the certainty of war could not be forestalled and that only through God's support in the rightful winner would the war end. ...read more.

Sanford. Dred Scott, a slave who had lived in the free state of Illinois and the free territory of Wisconsin before moving back to the slave state of Missouri, had appealed to the Supreme Court in hopes of being granted his freedom. Taney -- a staunch supporter of slavery and intent on protecting southerners from northern aggression -- wrote in the Court's majority opinion that, because Scott was black, he was not a citizen and therefore had no right to sue. The framers of the Constitution, he wrote, believed that blacks "had no rights which the white man was bound to respect; and that the negro might justly and lawfully be reduced to slavery for his benefit. He was bought and sold and treated as an ordinary article of merchandise and traffic, whenever profit could be made by it." Referring to the language in the Declaration of Independence that includes the phrase, "all men are created equal," Taney reasoned that "it is too clear for dispute, that the enslaved African race were not intended to be included, and formed no part of the people who framed and adopted this declaration. . . ." Abolitionists were incensed. Although disappointed, Frederick Douglass, found a bright side to the decision and announced, "my hopes were never brighter than now." For Douglass, the decision would bring slavery to the attention of the nation and was a step toward slavery's ultimate destruction. ...read more.