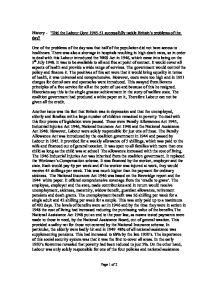 Labour and the Five Giants

History - "Did the Labour Govt 1945-51 successfully tackle Britain's problems of the day? One of the problems of the day was that half of the population did not have access to healthcare. There was also a shortage in hospitals resulting in high death rates, so in order to deal with this Labour introduced the NHS Act in 1946, which came into being on the 5th July 1948. It was to be available to all and free at point of contact. It would cover all aspects of health and provide a wide range of services. The government would control the policy and finance it. The positives of this act were that it would bring equality in terms of health, it was universal and comprehensive. However, costs were too high and in 1951 charges for dental care and spectacles were introduced. This swayed from Bevens principles of a free service for all at the point of use and because of this he resigned. ...read more.

The employee, employer and the state, made contributions and in return would receive unemployment, sickness, maternity, widow benefit, guardian allowance, retirement pensions and death grants. The unemployment benefit was 26 shilling per week for a single adult and 42 shilling per week for a couple. This was only paid up to a maximum of 492 days. The levels of benefits were set in 1946 and by the time they were in action in 1948 the cost of living had increased reducing the purchasing value of the benefits.The National Assistance Act 1948 put an end to the poor law, as means tested payments were made to those in need, by the National Assistance Board, out of general taxation. This provided a safety net for those not covered by the National Insurance scheme. In particular, the elderly were badly hit and in 1949 48% of all national assistance was supplementing pensions. This had increased to 68% by the late 1950's. ...read more.

Therefore, most of the scarce building materials were allocated to the local authority to build council houses for rent. Between 1945-51, four council houses were built to every one private house. The Housing Act 1945 was passed. This allowed the local authorities to use open spaces as sites for temporary housing, these were to have a maximum of 20 years life span. Between 1945-8, 157,000 of these prefabs were built with little effect. Many families took to squatting on disused army camps in the summer of 1946 but the government decided not to prosecute and instructed the local authorities to provide basic services and amenities to these families. The New Town Act 1946 was passed and allowed for the development of selected towns and developments e.g East Kilbride, Livingston, etc. Between 1945-9 Labour built 432,000 houses, far more than the private sector an achievement considering the shortage of builders and materials. However, it was not enough as the 1951 census revealed there were 750,000 fewer house than families and they did very little to improve old and poor housing. ?? ?? ?? ?? Page 1 of 2 ...read more.