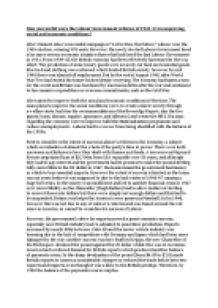 How successful were the Labour Government reforms of 1945-51 in improving social and economic conditions?

﻿How successful were the Labour Government reforms of 1945-51 in improving social and economic conditions? After Clement Atlee?s successful campaign of ?Let Us Face the Future,? Labour won the 1945 election, winning 393 seats. However, the newly elected Labour Government faced a far more serious economic situation than what had faced the last Labour Government in 1931. From 1939-45, the British economy had been effectively harnessed to the war effort. The production of some luxury goods were severely cut back and essential goods like food and clothing were rationed, which limited British society, however by mid 1940 there was almost full employment. But by the end of August 1945, after World War Two had ended, the future looked deeply worrying. The economy had taken a turn for the worst and Britain was burdened by enormous debts after the war and continued to face massive expenditure on overseas commitments, such as the Cold War. Atlee aimed to improve both the social and economic conditions of the time. The main plans to improve the social conditions were: to create a fairer society through a welfare state, build on the recommendations of the Beveridge Report, slay the five giants (want, disease, squalor, ignorance, and idleness) ...read more.

Between 1945 and 1950, wages rose by 1% and inflation only by 3%. However Labour?s controls began to stifle enterprise by 1948 and by 1951 needed to be set free from the restrictions. Also the agricultural subsidies were proving very expensive. Their policy of nationalisation (by 1951, 20% of the economy under state control) was hampered by the fact that they were very run down and the government had run out of money to invest in them. Perhaps keeping them private would have helped the economy more, and arguably nationalisation caused inefficiency and high cost. Moving onto Labour?s social reforms, the Beveridge Report of 1942, written by William Beveridge played a huge role, which stated the five giants of evil and need to introduce welfare, which included want, disease, squalor, ignorance, and idleness. Attlee wanted to build on these points. The Labour Government passed a variety of welfare and social reforms through parliament, such as the National Insurance Act in 1946 and the National Assistance Act in 1948. The National Insurance Act provided sickness and unemployment benefit, retirement benefit, and widow and maternity benefit; this act covered most eventualities, but it was still criticised because benefits were restricted- many workers were not included in this scheme. ...read more.

The main focus was on the primary sector due to the baby boom. This act was successful because many students learned about being a skilled worker. The negative side of this act was that this did not give working class children equal opportunities, and made the classes even more rigid. The last of the five giants is idleness. Attlee?s aim was to create and maintain full employment. Full employment was maintained through the period 1945-51; unemployment did not get higher than four percent. Improving idleness was very successful during this time period. Overall, the Labour government was very successful with their aims to improve the social and economic conditions in Britain. So overall, considering the economy, Britain was in far better shape in 1951 than in 1945 when the war had ended: unemployment remained low throughout the whole country and brought confidence in British industry?s ability to compete. However, although Labour?s policies paid a large role in the upturn of the economy, Marshall Aid was key and USA provided a huge market for exports, especially due to the lack of competition from Germany and Japan. Also, there were some failures and obstacles, such as not enough housing or Bevan?s opposition, but the Labour government did improve lives, they managed to slay the five giants. ...read more.