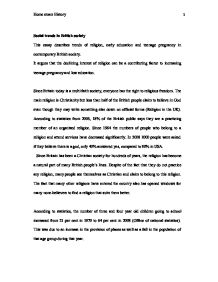 Social trends in British society This essay describes trends of religion, early education and teenage pregnancy in contemporary British society. It argues that the declining interest of religion can be a contributing factor to increasing teenage pregnancy and low education. Since Britain today is a multi faith society, everyone has the right to religious freedom. The main religion is Christianity but less than half of the British people claim to believe in God even though they may write something else down on official forms (Religion in the UK). According to statistics from 2006, 18% of the British public says they are a practicing member of an organized religion. ...read more.

This was due to an increase in the provision of places as well as a fall in the population of that age group during that year. The increase of studying children is pointing at an increase in parents' interest in having educated children and in starting the learning process early. Studies have shown that a low education often will lead to a low income and an early start in education may increase the will to continuing educating later in life (National centre for children in poverty). There can both be advantages and disadvantages in starting education in an early age. Children in the UK are forced by law to start school at the latest when they turn five years old, compared to countries in Scandinavia where the children starts school at first when they turn six or seven. ...read more.

Hilary Pannack, of the sex education charity Straight Talking says that the teenage pregnancy means generations of child poverty (BBC news) since children of teenage parents' often tend to be teenage parents themselves. Comparing these three trends, a connection can be found in the fact that people don't seem to have the same religious views as in earlier years. Missing the kind of sexual education that is included in a religious education and the responsibility that is being taught, teenagers are in need of a more thorough sexual education at school that addresses the possible consequences. Teenage parents are at home raising the child and do not have time to get a higher education. If the aforementioned study is right, the teenagers� children will not get a higher education either and a vicious cycle has begun. ...read more.