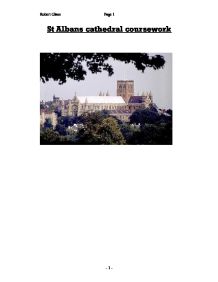 St Albans cathedral coursework The reformation was when religion changed in England from catholic to protestant. It happened in 1530 and carried on through out the decade Henry VII decided to change the religion when the pope would not allow Henry to get a divorce from Catharine of Aragon because she could not have boy and Henry needed a boy to become heir to the throne when he died so he found out about a religion called protestant where he could be the head of the church and not the pope. This way he could get money for his army by taking all the money from the churches and could protect England from invasion by big catholic countries like Spain. Being the head of the church also gave him power over the pope. St Albans used to be called verulamium in the roman era it was a roman garacon town. ...read more.

The things that are not there today are the pond, the monastery buildings, tower spire is not there, the cloisters have gone and so as the well. The methods the artist would have used at the time was common knowledge reference books you can also see the foundations in the summer and the depth of that tells you what height the buildings would have been. The problem is that the artist can only find out certain things from the foundations like what size and shape the windows and doors were what materials they would have used for the roof and brick work and what the buildings looked like but there are some clues because most of the houses in st Albans were made at the same time the artist could have looked at these to see what type of material they used and what they might have looked like. [r g1] [r g2] ?? ?? ?? ?? Robert Glass Page 1 - 1 - ...read more.