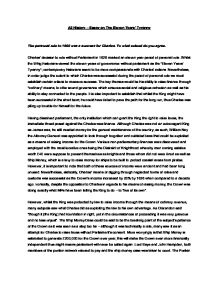 The personal rule to 1640 was a success for Charles. To what extend do you agree.

A2 History - Essay on The Eleven Years' Tyranny The personal rule to 1640 was a success for Charles. To what extend do you agree. Charles' decision to rule without Parliament in 1629 marked an eleven year period of personal rule. Whilst the Whig historians viewed the eleven years of governance without parliament as the "Eleven Years' Tyranny"; contemporary historians seem to be more compassionate with Charles' actions. Nevertheless, in order judge the extent to which Charles was successful during the period of personal rule we must establish certain criteria to measure success. The key themes would be his ability to raise finance through "ordinary" means, to offer sound governance which ensures social and religious cohesion as well as his ability to stay connected to the people. It is also important to establish that whilst the King might have been successful in the short term; he could have failed to pave the path for the long run, thus Charles was piling up trouble for himself for the future. Having dissolved parliament, the only institution which can grant the King the right to raise taxes, the immediate threat posed against the Charles was finance. Although Charles was not an extravagant King as James was, he still needed money for the general maintenance of the country; as such, William Noy the Attorney General was appointed to look through forgotten and outdated laws that could be exploited as a means of raising income for the Crown. ...read more.

Secondly, one can say that it was just a matter of time until Charles had to call for parliament. This is because whilst the Crown was able to raise a good sum through ordinary revenue, in the time of crisis such as wars, he would need to ask for a parliamentary subsidy. In regards to governance during the eleven years without parliament, Strafford played a dominating role in Charles' administration. Strafford was appointed Lord President of the Council of the North and was later promoted to the post of Lord Deputy of Ireland. Strafford embarked upon a "thorough" policy and had a strong belief that authoritarian rule was best for the people as it provides a strong government. One can praise Strafford as his policy was needed to shake up the inefficient and corrupted government passed on from James. Also, although he was impartial and strict, Strafford did govern through a parliament thus could not be labeled as an absolute. Charles' success in appointing someone capable to oversee Irish affairs was important as Ireland has always been a potential Catholic threat and the English Crown had never been able to manage Ireland beyond the Pale. Governing without parliament also meant that Charles could not formally legislate. However, the Crown was able to utilize his control over the judiciary system to reinterpreted and bend laws. As such, the prerogative courts and regional councils became important institutions for the Crown. ...read more.

Charles should have known that without parliament, an institution which connects the Crown to his subjects to some extent, he needed to set out the image that he was willing to connect with the people or at less make an impression on public opinion. Charles' attempt to use painting as a means of reinforcing his Divine image was largely unsuccessful as the public saw through it as no more than a poor propaganda exercise. Although Charles managed to govern without parliament for eleven years, it seems as if survival was the focus and not success. Charles simply got by in regards to finance and governing; but his approach, even if deemed intelligent or sound, had a limited short term effect. It seemed as if from the very start, Charles was doomed to fail. The Crown seemed to have undermined the role of parliament whilst overestimating the position of the Crown. Politically, Charles was storing up discontent against the reign and by surrounding himself with Buckingham-like advisors such as Laud and Strafford, matters were only made worse. Ironically, the eleven year tyranny benefited the Puritan Network most. Discontent MPs were ever so motivated to attack and plot against the Crown whilst the person of the Kingdom was made to feel alienated. As such, it is fair to conclude that the personal rule was much of a failure and indeed, it was a mistake for Charles to have decided to rule without Parliament in the first place. ...read more.