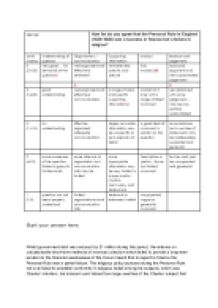 How far do you agree that the Personal Rule in England (1629-1640) was a success in finance but a failure in religion?

Ã¯Â»Â¿Name: How far do you agree that the Personal Rule in England (1629-1640) was a success in finance but a failure in religion? Level (marks) Understanding of question Organisation / communication Supporting information analysis Balance and judgement 5 (21-25) very good â€¦ full demands of the questionX well-organised and effectively delivered well-selected, specific and precise fully analyticalX balanced argument and well substantiated judgement X X 4 (16-20) good understanding well-organised and effectively communicated a range of clear and specific supporting informationX analytical in style with a range of direct comment well-balanced with some judgement â€¦ may be only partially substantiated 3 (11-15) an understanding Effective organised, adequate communication largely accurate information may be unspecific or lack precision of detail a good deal of comment in relation to the question some balance, but a number of istatements may be inadequately supported and generalist 2 (6-10) some awareness of the questionâ€¦ failure to grasp its full demands some attempt at organisation but communication skills may be limited some appropriate information may be very limited in scope and/or contain inaccuracy and irrelevance Descriptive or partial... Some, but limited, comment for the most part, be unsupported and generalist 1 (1-5) ...read more.

Also, these fines induced resentment from the Political Nation, as men who owned land worth over Â£40 a year were targeted, establishing mistrust from powerful local elites whose support Charles was reliant upon. Ship money is another example of a tax that, while providing significant revenue to the government, was not a plausible long term solution. Levied across the whole country between 1635 and 1640, Â£800,000 was raised for the Navy in the construction of a fleet. Though this may appear to be a successful financial policy, closer inspection reveals that it was not a long term alternative to a parliamentary subsidy. Following the partial vindication of Hampden in 1637, when 5 out of 12 Judges found in his favour regarding the legality of Ship Money a bit more detail needed here, payment rates fell from 90% between 1634 and 1638 to 20% in 1639. Charlesâ€™ extraction of Â£70,000 from the City of London in 1635 after they failed to find enough people to settle in Londonderry is another example of a policy that achieved short-term financial gains for the Crown but harmed the government in the long run, with City only loaning him Â£5000 in 1639 in preparation for the Bishops War. ...read more.

Given that Prynne was hailed as a martyr by many when he was punished by the star chamber with mutilation and life imprisonment, Laudianism had inspired opposition to the King, a clear sign of failure. This suggests that Barry Coward was correct in claiming that â€˜Laudianism made the greatest contributionâ€™ to growing anger at Charlesâ€™ government, meaning religious policy during the Personal Rule caused such levels of discontent that radical Puritanism was now a mainstream theological position. In conclusion, the Personal Rule was a failure in both finance and religion. Whilst the financial position of the government improved during this period, this was financed by short-term solutions rather than a viable alternative to parliamentary subsidies. Ann Hughes notes that it was only possible to govern without parliament â€˜as long as he avoided warâ€™, meaning that the Crown failed to establish financial independence. Laudianism failed in establishing conformity in religious belief amongst the English, while also inspiring opposition to Charles, suggesting that Laudianism was a catastrophic failure as it set the stage for radical puritanism to enter the mainstream. A sensible and well argued answer. You have a concise style (which is good), but occasionally need to expand on your examples a little. You make some primary sources and the views of historians, although not always in the places where they might have made the most impact. ...read more.