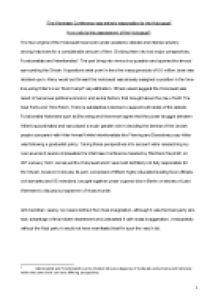 &quot;The Wannsee Conference was entirely responsible for the Holocaust&quot; How valid is this assessment of the Holocaust?

﻿?The Wannsee Conference was entirely responsible for the Holocaust?. How valid is this assessment of the Holocaust? The true origins of the Holocaust have been under academic debate and intense scrutiny among historians for a considerable amount of time. Dividing them into two major perspectives; Functionalists and Intentionalist.[1] The pair bring into view a key question and queries the shroud surrounding the Shoah. It questions what point in time the mass genocide of 6.6 million Jews was decided upon. Many would put forward the Holocaust was already assigned a position in the time-line using Hitler's own ?Mein Kampf? as justification. Others would suggest the Holocaust was result of numerous political economic and social factors, that brought about the rise of both The Nazi Party and Thrid Reich. There is substantial evidence to support both sides of the debate. Functionalist historians such as Browning and Mommsen agree that the power struggle between Hitler's subordinates and war played a much greater role in deciding the demise of the Jewish people compared with Hitler himself while Intentionalists like Fleming and Dawidowicz say Hitler was following a gradualist policy. Taking these perspectives into account while researching my own sources it seems implausible the Wannsee Conference headed by Reinhard Heydrich on 20th January 1942, conceived the Holocaust and it was most definitely not fully responsible for the Shoah, however it did play its part, comprised of fifteen highly educated leading Nazi officials, civil servants and SS members, brought together under a grand villa in Berlin on shores of Lake Wannsee to discuss a programme of mass murder. Anti-Semitism was by no means birthed from Nazi imagination, although it was the Nazi party who took advantage of this hidden resentment and unleashed it with mass exaggeration. Undoubtedly without the Nazi party it would not have manifested itself in such the way it did. Rhode's perspective is from the very early stages of the Nazi party they had clear enemy. ...read more.

The third step through this line of events can be viewed as Kristallnacht,[10] next to this is the invasion of the Soviet Union and the horrific work of the Einstazgruppen which led to the Wannsee Conference taking place, this then cemented the attitudes and actions that had arisen through the previous steps, finally all culminating in the arrival of the Holocaust. Kristallnacht itself was the act of a coincidence, but it leads as an example as to how far Anti-Semitism within Germany and Austria had progressed in terms of hatred of a certain race and allows an insight into how the acts of one were accountable for all in terms of the Jews. This source is particularly interesting as we get to see just how far the German people had been indoctrinated into the Nazi propaganda, although there were some who were against Kristallnacht, they were many who took it as an act of war, and saw it as their right to rid their country of the Jewish conspiracy. What is most disturbing about this extract is that it shows the murderous attitudes of people of persuasion and how far the German people were willing to go after being under the Nazi propaganda machine of Dr. Joseph Goebells. Kristallnacht was the result of the German people holding all the Jews accountable for the acts of one and was a key stage in the 1938 pogroms which would then culminate in the Holocaust. It was the actions of well-educated people, mostly the middle class which truly enforced Kristallnacht, taking it to a whole new level, the Nazi party had the fire service on hand just in-case the synagogue fires spread to the neighbouring buildings. Hitler was apart of Kristallnacht, it was mostly Joseph Goebbels who enraged the resentment towards to the Jews to produce this outcome, however the main ideology behind Kristallnacht was to remove Jews from their homes in order to re-home German citizens within the city. ...read more.

[6] Richard Rhodes, Masters of Death ? The SS einsatzgruppen and the invention of the Holocaust. Pg.98 ?The German invasion of the Soviet Union in June 1941, codenamed ?Operation Barbarossa? was indeed to be inextricably linked with the decision to implement a genocidal war against all the Jews of Europe.? [7] 15 August 1941 two months into ?Operation Barbarossa? Himmler went to the Minsk Ghetto to observe the shootings of ?undesirables? for the first time. During the shooting Himmler who had never seen dead people before stood right at the edge of the open grave to look in, and because of this he had brain matter splashed onto his coat and head and began to feel sick, heaving and wobbling. Himmler then took into account the effect shooting people would have on their soldiers and began to look for alternative methods. [8] The Enabling Act was a decree put forth by Hitler in his rise to power that allowed him to maintain his reign over the German people, the decree abolished the need for a democratic vote every four years and therefore allowed Hitler to maintain his political position until his demise in 1945. [9] The Nuremburg Laws of September 15th 1935: the laws outlawed relationships betweens Jews and Aryans in order to make the Aryan blood pure again. [10] On the 9th November 1938: Kristallnacht (Night of broken glass) was responsible for approximately 100 dead Jews, 20,000 German and Austrian Jews arrested; many of those were sent to concentration camps. 1,350 Jewish synagogues were burnt to the ground and Jewish shops throughout Germany and Austria had their windows smashed and their homes looted. [11] By January 1942, the Nazi party had 11 concentration camps throughout their occupation of Europe. These were Dachau(1933), Sachsenhausen(1936), Buchenwald(1937), Flossenburg(1937), Mauthausen(1938), Ravensbruck(1939), Gusen(1939), Neuengamme(1940), Gross-Rosen(1940), Natzweiler(1940) and finally Auschwitz(1940) [12] http://www.jewishvirtuallibrary.org/jsource/Holocaust/gascamp.html [13] Heydrich was Heinrich Himmler's deputy and head of the Reichssicherheitshauptamt. (Reich Security Main Office, or RSHA) [14] Eichman was in charge of organising and maintaining the logistics of the Holocaust. ...read more.