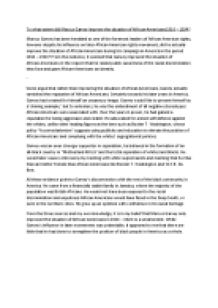 To what extent did Marcus Garvey improve the situation of African-Americans 1916 1924?

Over the years in power, he had gained a reputation for being aggressive and violent. He advocated for armed self-defence against the whites, unlike other leading figures at the time such as Booker T. Washington, whose policy ?Accomodationism? suggests using publicity and education to elevate the position of African Americans and complying with the whites? segregationist policies. Garvey was an even stronger supporter in separatism, he believed in the formation of an all-black country in ?Motherland Africa? and the total separation of whites and blacks. ...read more.

He would not have been exposed to the racial discrimination and unjustness African Americans would have faced in the Deep South, or even in the northern cities. He grew up an optimist with confidence in his racial heritage. From the three sources and my own knowledge, it is in my belief that Marcus Garvey only improved the situation of African-Americans in 1916 ? 1924 to a small extent. While Garvey?s influence in later movements was undeniable, it appeared to me that there are little that he had done to strengthen the position of black people in America as a whole. ...read more.