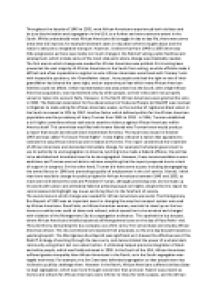 To what extent did the situation of African Americans improve between 1945-55?

﻿Throughout the decade of 1945 to 1955, most African Americans experienced both de facto and de jure discrimination and segregation in the USA, to a further and more extreme extent in the South. Whilst undoubtedly most African Americans did struggle in day to day life, there were some areas that did improve, for example landmark cases in education where brought about and the nation?s attitude to integrated transport. However, I believe that from 1945 to 1955 there was little progression as there was mostly not much change in the fields of voting, public facilities and employment, which include some of the most vital parts where change was drastically needed. The first area in which change was needed for African Americans was political. Strict voting laws prevented the vast majority of African Americans in the South from voting, as white officials made it difficult and often impossible to register to vote. African Americans were faced with ?literacy? tests with impossible questions, the ?Grandfather clause?, here people only had the right to vote if their grandfather had shared the same right, and an expensive poll tax which many African American families could not afford. Unfair representation was also present as the South, with a high African American population, was represented only by white people, so their views were not properly voiced or taken into account fairly. ...read more.

The Montgomery Bus Boycott of 1955 was an important event in changing the way the transport system was used by African Americans. Rosa Parks, an African American woman, was told to stand up on the bus home so a white man could sit down and refused, which caused her to be arrested and charged with violation of the Montgomery City bus segregation ordinance. This sparked the bus boycott, where African Americans initially boycotted all Montgomery buses on the day of Rosa Parks? trial. They did this by demanding the bus company use a first come, first served basis and employ African American drivers. The city commissioners rejected their proposals, so the one day boycott became a yearlong boycott. The Montgomery Bus Boycott was significant as it showed the effectiveness of the NAACP strategy of working through the law courts, and demonstrated the power of a whole black community using direct but non-violent action. It ultimately helped promote integration of black and white people, which was finally achieved in 1956. In the South of the USA, African Americans suffered greater inequality than African Americans in the North, as in the South segregation was legally enshrined. For example, the Jim Crow laws defended segregation so that people were less inclined to publicly challenge them. ...read more.

in part to the migration earlier in the century, Middle-class African Americans were much more assertive and had a better understanding of America?s legal system, so were more likely to challenge racial inequality in the courts. Consequently, the Supreme Court felt under greater pressure to rule in their favour. Overall, I think that the position of African Americans legally did improve a lot, as initially, campaigners had success with court cases such as Morgan v. Virginia, Sweatt vs. Painter and Brown vs. Board of Education which showed that segregation was unconstitutional. However, these de jure victories were slow to produced facto desegregation. As a result, groups such as CORE and the NAACP organised popular campaigns to test the implementation of Supreme Court rulings and challenge segregation at a grassroots level. In conclusion, I think that the position of African Americans did improve in the years 1945 to 1955, although not to the extent that they would have liked. The Brown rulings were vital in securing the beginning of the end of segregation, and the NAACP played a vital role in challenging segregation in the courts. Following the major court cases, there was an increase in local activism by groups such as the NAACP and CORE, who organised new voter registration campaigns, local protests and boycotts against different aspects of segregation. ...read more.