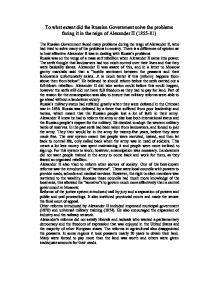 To what extent did the Russian Government solve the problems facing it in the reign of Alexander II (1855-81) The Russian Government faced many problems during the reign of Alexander II, who had tried to solve many of the problems in society. There is a difference of opinion as to how effective Alexander II was in dealing with Russia's problems. Russia was on the verge of a mass serf rebellion when Alexander II came into power. The serfs thought that landowners had too much control over their lives and that they were basically slaves. Alexander II was aware of this, and in a letter to Moscow gentry marshals said that a "hostile sentiment between the peasants and their landowners unfortunately exists...it is much better if this [reform] happens from above then from below". ...read more.

Alexander II knew he had to reform the army or else lose both international status and the Russian people's respect for the military. He decided to adopt the western military tactic of reserves. In the past serfs had been taken from landowners, and forced to join the army. They then would be in the army for twenty-five years, before they were made free. The new system meant that people were recruited, trained, and then let back to normal life, only called back when the army was in need of soldiers. This meant a lot less money was spent maintaining it and people were more inclined to sign up. ...read more.

and universal military training (1874). He also encouraged the expansion of industry and the railway network. Alexander's reforms did not satisfy liberals and radicals who wanted a parliamentary democracy and the freedom of expression that was enjoyed in the United States and the majority of other European states. The reforms in agricultural also disappointed the peasants. In some regions it took peasants nearly 20 years to obtain their land. Many were forced to pay more than the land was worth and others were given inadequate amounts for their needs. Although Alexander II did reform and emancipate the serfs, one major step Russia did not take was to create a Duma, as Alexander II believed this to be a "senseless dream". This would have satisfied many Russian people, and if one had been created earlier then there would not have been so much repression. ...read more.