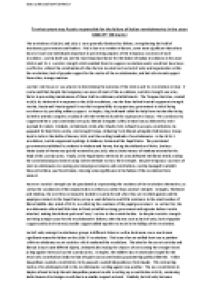 To what extent was Austria responsible for the failure of Italian revolutionaries in the years 1820-37? (30 marks)

﻿Essay q.Italy 1815-184729/09/13 To what extent was Austria responsible for the failure of Italian revolutionaries in the years 1820-37? (30 marks) The revolutions of 1820-1 and 1831-2 were generally dismissed as failures, strengthening the hold of reactionary governments and leaders. This is due to a number of factors, some more significant that others however each one individually important in preventing progress of the temporary successes of each revolution. Austria itself was not the most important factor for the failure of Italian revolutions in the years 1820-1 and 31-2. Austria?s strength which enabled them to suppress revolutions easily would not have been so effective without the combination of other factors involved such as lack of unity and organisation within the revolutions, lack of popular support for the motive of the revolutionaries, and lack of external support from other, stronger nations. Austria?s role however was a factor in determining the outcome of the 1820-1 and 31-2 revolutions in Italy. It can be said that despite the temporary successes of most of the revolutions, Austria?s strength was a key factor in preventing maintenance of these brief revolutionary establishments. ...read more.

In Naples, the middle-class revolutionists hoped for the return of a constitution similar to that of Spain?s 1812 constitution, guaranteeing political liberties. Whilst Neapolitans wanted a constitution, Sicily peasants wanted independence from Naples. This contrasting motive of revolutionaries led to the revolutionaries working against one another. The new constitution in Naples refused to help the anti-Neapolitan peasant revolts in setting up a constitution in Sicily, weakening both chances of a stronger revolt due to a smaller support network. Similarly, lack of unity between revolutionists is evident by the way the revolutionary government in Bologna refused to send help to Modena?s unorganised riot before Duke Francis returned with the Austrian army. This lack of unity in aims, communication and co-operation of the revolutionary localised and separate groups made the revolutions much easier to crush. The separation and secrecy of the secret societies which made up the revolution groups were unorganised and scattered in localised aims. This is evident from the easily overthrown revolt in Modena, due to lack of organisation in a short space of time. Lack of popular support was another important factor in determining the inevitable failure of the revolutions. ...read more.

Alongside this, the revolutions were mostly limited to middle-class men. If the ideals and motives had been more open to the majority of the population, rather than being so secretive and limited to the select few intellectuals, then more people would be fighting for the same cause, creating a larger revolution. This in itself would have been a barrier for Austria?s strength. Finally, if there was more support from other nations for the revolutions in Italy, then Austria may have not been able to physically stop the revolutions so easily, due to number and military resources. So although Austria was strong and continually repressed revolutions one after the other with support from Russia and Prussia, without these other factors they would not have been able to prevent revolution in Italy so easily. These combined factors; lack of unity, popular support and external support, were together, a way of weakening the revolutions and enabling Austria to easily sustain them. Alone, they would all be less significant than the combination of all three against Austria. The reality of Austria?s strength is undermined by these factors as they disable the historian from being able to fairly asses the strength of Austria. ...read more.