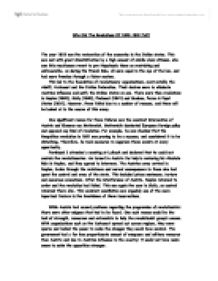 Why Did The Revolutions Of 1820-1831 Fail? The year 1815 saw the restoration of the monarchy in the Italian states. This was met with great dissatisfaction by a high amount of middle class citizens, who saw this reactionary revert to pre-Napoleonic times as restricting and unfavourable, as during the French Rule, all were equal in the eye of the law, and had more freedom through a fairer system. This led to the foundation of revolutionary organizations, most notably the Adelfi, Carbonari and the Italian Federation. Their desires were to eliminate Austrian influence and unify the Italian states as one. There were then revolutions in Naples (1820), Sicily (1820), Piedmont (1821) and Modena, Parma & Papal States (1831). However, these failed due to a number of reasons, and these will be looked at in the course of this essay. One significant reason for these failures was the constant intervention of Austria and Klemens von Metternich. Metternich dominated European foreign policy and opposed any kind of revolution. For example, he was shocked that the Neapolitan revolution in 1821 was proving to be a success, and considered it to be disturbing. Therefore, he took measures to suppress these events at every opportunity. ...read more.

As well as that, Austria would not have looked upon the country that had assisted the Italian states favourably, so for a country such as France, it would only be creating problems that they did not need. Not only were foreign countries unwilling to contribute to rebellions: Because revolutions were often a local affair to rise against circumstantial and distinctive issues (for example, King Ferdinand I increasing the Church's power to censor challenging literature in Naples in 1818), it was a concern of that state and that state only - And as other neighbouring states were unaffected by these issues, they saw no reason to intervene. After all, different states had concerns of their own. An example of this would be the revolution of Modena in 1831, where Bologna refused to send help - they were suffering through the Papal restoration during this time. This prevented Modena from having the strength and resources to succeed in their attempt at a revolution. While revolutionary organizations struggled to attract co-operation between bordering states, the organizations themselves had trouble in concerns to the amount of people involved in rebellions. Less than ten percent of the population were involved in these groups, the most popular of which was the Carbonari. ...read more.

This arguably resulted in a lesser degree of commitment and therefore, not enough effort was made to make some revolutions successful. After addressing all of the factors in how the revolutions of 1820-1831 were unsuccessful, I can come to a conclusion on what I believe were the most significant. There were minor problems, such as fear of a "Mob Rule" and the lack of leadership, greater problems, such as the co-operation of organizations, the lack of support and absence of foreign assistance, and significant complications, like the government's insufficient military resources, and Austrian intervention and influence, particularly that of Metternich. In conclusion, I believe that Austria was the clearest reason for the failure of the revolutions. Firstly, they had control over the Italian states. They were states for a reason - to fragment organizations such as the Carbonari and the Adelfi and keep them weak to prevent outbursts of rebellion. Secondly, it did not matter if a revolution was beginning to look like it could end successfully. The monarch of the state (for example Ferdinand I or Victor Emmanuel I) had the authority to allow Austria and Metternich to intervene wherever necessary to quell the threat of an uprising. Finally, the Austrian empire was powerful and the Italian revolutionists had no chance of fighting against this if intervention had been called for. ...read more.