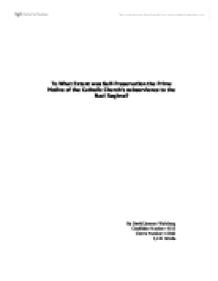 To What Extent was Self-Preservation the Prime Motive of the Catholic Church's subservience to the Nazi Regime?

To What Extent was Self-Preservation the Prime Motive of the Catholic Church's subservience to the Nazi Regime? By David Jeannot Weinberg Candidate Number: 4116 Centre Number: 12260 3,142 Words The Catholic Church (referenced as simply 'The Church' from here on) was a fairly unique resistance group during the Nazi period 1933 - 1945. It was unique for two main reasons; firstly it was the only counter-authority1 to the Nazi Regime permitted under Nazi Law, and secondly, it was the only institution that radically changed the interpretations of its core principles through the introduction of new personalities. The question above deals with three major areas of debate. The first, and most crucial, is whether the Church used resistance to ensure its own survival and whether it was central to their controversial role during the above period. The second area of debate is contrary to the first; it deals with the other motives that the Church may have had for collaborating or assisting the regime, specifically whether or not Anti-Semitism, played a significant part of the Churches actions during the Nazi Period. However, the third area of debate, the extent to which the Catholic Church was strictly subservient to the Nazi Regime is so substantial, there is just not enough space in this project to cover it adequately. Therefore, my investigation will not concern itself it detail with the actions of the Catholic Church, but rather its motives for undertaking those actions. In writing this, I will reference many sources from a number of political and religious backgrounds. There are a number of sources of varying utility, which help to develop an argument. For example, Primary sources such, as the Encyclical 'Humani Generis Unitas' are invaluable when discussing the dissimilarities between Pope Pious XI, and Pope Pious XII. As a direct Issue of the Church it can be seen as a genuine attempt by the Church to clarify its position on the persecution of the Jews, rather than a piece of apologetic historical commentary after the event and is therefore able to described as politically untainted. ...read more.

by mistake, or he may be trying to distance his own personal beliefs in Christianity, from that of the atrocities synonymous with the Anti-Semitism within the Nazi concentration camps. As a result, his work becomes questionable, compared with Wrights' and Greich-Polelle's'. On the other extreme of the overall debate, Daniel Jonah Goldhagen, and John Cornwell, both believe that the Church as an institution was anti-Semitic and that racism played a massive part in what they believe, was the Churches acceptance and collaboration with the Nazi Regime. They both publicly denounce Pope Pious XII as 'Hitler's Pope' and criticise the Church as ignoring the atrocities performed by the Nazi's, even though it posed a complete antithesis to their moral code of ethics. In Daniel Goldhagens' book 'A Moral Reckoning', he condemns the Church as wholly racist against the Jews and attacks particularly Pacelli as a nationalist. He cites the suppression of the encyclical 'Humani Generis Unitas' as a clear example of Pacelli's true anti-Semitism and his abandonment of decent Catholic morals and ethics. This encyclical was written by Pius XI in which he condemns the actions of the Nazi's and those who are involved in the racial segregation of the Jews. "The practise of evasion and denial began as early as 1939 when Pope Pious XII suppressed Humani Generis Unitas, the ... antiracism encyclical of his ... predecessor... It would finally ... have the Church defend the hounded Jews"8 Goldhagen rightly points out the importance of this encyclical because it would clarify, officially, the position of the Church on genocide in Nazi Germany, specifically condemning it, "such persecutory methods are totally at variance with the true spirit of the Catholic Church"9. Goldhagen goes on to make clear the distinction between Pope Pious XI and Pious XII, citing Pious XI as an ideologue who was set to uphold the Catholic moral of denouncing the Nazi Regime through the 'hidden encyclical'. ...read more.

He even shows a massive translation error, which completely changes the whole context with which a Chapter of his book refers to. " ... The Encyclical letter ... with 'burning preoccupation' and not 'with great appreciation' as Cornwell mistranslates..." As a result, the value of Cornwell's work has come under massive strain. Although Dr Gumpel also has been criticised for his attacks on Cornwell, the evidence that Cornwell has misrepresented Pacelli as a character is considerable and as a result, his work is less useful that it at first appears to be. In Conclusion, the evidence supporting the claim that the Churches actions during the Nazi period were purely in self-defence, in other words, for self-preservation, I believe outweigh the accusations of anti-Semitism within the Church. There is strong evidence that the Church as an institution is anti-Semitic, and there can be no doubt that there are sections of the Catholic Church that do believe that the Jews still posses an unshakeable guilt over the death of Jesus. There is also a chance that Pacelli (Pope Pious XII) could have been one of those people who believed in this guilt, but when critically appraising the merits of the historians that have claimed this, I have found myself more convinced by Bette Greich-Polelle's explanation of events. In reference to her work, it is my belief that the Church during the Nazi period was self-interested and was set on trying to avoid another Kulturkampf, thus by accepting restrictions on their political freedoms it would ensure the spiritual dimension of Catholicism would live on throughout and beyond Nazi Germany. 1 P.39 Robert Gellantely The Gestapo & German Society 2 J R C Wright - "Hitler and the Churches" 1970 3 J R C Wright - Private Correspondence (See Appendix 1) 4 Encyclopaedia (Internet Site) - The Secret Vatican Archives 5 Beth A Greich-Polelle - Private Correspondence (See Appendix 2) 6 P. ...read more.