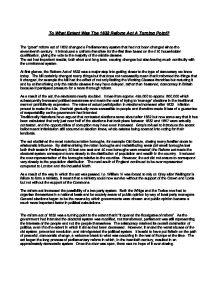 To What Extent Was The 1832 Reform Act A Turning Point?

To What Extent Was The 1832 Reform Act A Turning Point? The "great" reform act of 1832 changed a Parliamentary system that had not been changed since the seventeenth century. It introduced a uniform franchise for the first time based on the �10 householder qualification, giving the vote to the majority of the middle classes. The act had important results, both short and long-term, causing changes but also leaving much continuity with the unreformed system. At first glance, the Reform Act of 1832 was a major step into getting closer to the type of democracy we know today. The bill certainly changed many things but that does not necessarily mean that it reformed the things that it changed, for example the bill had the effect of not only limiting the Working Classes franchise but reducing ...read more.

Grey's refusal to introduce the secret ballot meant intimidation still occurred at election times, whole estates being coerced into voting for their landlords. The act abolished the most notorious rotten boroughs, for example Old Sarum, closing many familiar doors to aristocratic influence. By disfranchising the rotten boroughs and redistributing seats (56 small boroughs lost both their seats in Parliament, 30 lost one seat and 40 new boroughs were created) the Reform act made the electoral system correspond more closely to the distribution of population and wealth in the country. It reduced the over-representation of the boroughs relative to the counties. However, the act did not ensure to correspond very closely to the population distribution. The rural south of England continued to be over represented compared to London and the industrial North. ...read more.

The reform act of 1832 was a turning point to the extent that it "it opened the floodgates of reform". As the government had intended the electoral system was modified, not transformed, parliament was still representing the interests of the people and not the people themselves. The aristocracy retained its overall domination of politics, even if to the extent in which it did so had been decreased. However, it ended the worst abuses of the old system, prevented revolution, and reinvigorated the political system. It is said to have put Britain on the path of peaceful, democratic change, a welcome break to what was occurring in the rest of Europe at the time. The act began the long process of parliamentary reform in which, in the twentieth century, resulted in an approximately democratic system. Once the door was open, there was no hope of it ever closing. ...read more.