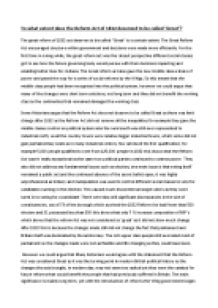 To what extent does the Reform Act of 1832 deserved to be called Great?

﻿To what extent does the Reform Act of 1832 deserved to be called ?Great?? The great reform of 1832 act deserves to be called ?Great? to a certain extent. The Great Reform Act encouraged structure within government and decisions were made more efficiently. For the first time in a long while, the great reform act was the closest perspective different social classes got to see how the future governing body would pursue with their decisions impacting and enabling better lives for civilians. The Great reform act also gave the new middle class a share of power and paved the way for a series of social reforms by the Whigs. So this meant that the middle class people had been recognised into the political system, however we could argue that many of the changes were short term solutions, not long term and they did not benefit the working class as the continuities that remained damaged the working class. Some Historians argue that the Reform Act does not deserve to be called Great as there was limit change after 1832 as the Reform Act did not remove all the inequalities for example they gave the ...read more.

brought, in modern day, may not seem too radical yet they were the catalyst for future reforms that would benefit the people that had previously suffered in Britain. The main significance is mainly long term, yet with the introduction of reforms the Whig government began to gain confidence and authority with the reforms they were passing. Open boroughs were abolished; this meant that less working class men got the vote. In the past any working class men who were in an open borough at the time of voting were allowed to vote. This shows how the voting rules weren?t made uniform, and it seemed that the rules were made up as they went along. This was ?great? as it meant that the voting was to become more uniform and fair. 56 rotten and pocket boroughs were abolished which meant that more of the population were allowed to vote. Rotten borough?s was where no one could vote, the boroughs were based in the countryside due to the Industrial Revolution. Pocket boroughs were also in the countryside, however only some of the pocket borough public could vote, they would also only have one landowner. ...read more.

Industrial towns such as Manchester, Birmingham and Sheffield were given the chance to elect MP?s for the first time. This change was important as the more industrialised towns were made subject to being represented within parliament therefore getting their views across reducing the geographical imbalance. Although a few industrialised towns got MP?s, there was still a slight geographical imbalance. However, it was reduced which gave more people a voice to speak out and put their ideas across. Also, this change is important as it meant that industrial workers who were given the chance to become MP could speak out for the working classes thus making them more eligible and closer to making a change associated with working conditions. This change contributed to the greatness of the Great Reform Act, because it clearly conveys how people of various status could become part of parliament and join in with voting and electing MP?s. In conclusion the reform deserves to be titled as ?Great? as it was the first major reform of Britain which consisted of many small changes of which combined together produced a greater Britain both within the short-term and long-term. The changes when combined developed equality, fairness, efficiency and rationality. ...read more.