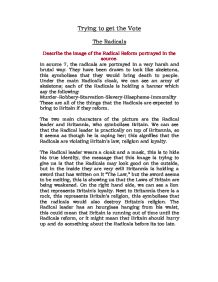 Trying to get the Vote - The Radicals - Describe the image of the Radical Reform portrayed in the source.

Trying to get the Vote The Radicals Describe the image of the Radical Reform portrayed in the source. In source 7, the radicals are portrayed in a very harsh and brutal way. They have been drawn to look like skeletons, this symbolises that they would bring death to people. Under the main Radical's cloak, we can see an army of skeletons; each of the Radicals is holding a banner which say the following: Murder-Robbery-Starvation-Slavery-Blaspheme-Immorality These are all of the things that the Radicals are expected to bring to Britain if they reform. The two main characters of the picture are the Radical leader and Britannia, who symbolises Britain. ...read more.

Next to Britannia there is a rock, this represents Britain's religion, this symbolises that the radicals would also destroy Britain's religion. The Radical leader has an hourglass hanging from his waist, this could mean that Britain is running out of time until the Radicals reform, or it might mean that Britain should hurry up and do something about the Radicals before its too late. Why do you think this source was produced? I think this source was produced against the Radicals. It shows them as vicious looking skeletons with evil faces, this was probably done to convince people that the Radicals were really bad. ...read more.

How did they act against the Radicals? What types of pictures were drawn around the early 1800's about Parliament? Etc. Yes the source is also reliable, but its reliability is awkward because the source is very biased. It is reliable if you wanted to know specific things, like mentioned above. It is reliable if you wanted to know people's opinions, but it is not entirely reliable because it is biased and it does not show what really happen, because as we know, the Radicals weren't skeletons and what is shown on the picture did not really happen. So yes the source is useful and reliable but it depends on the information you want to find out; its usefulness and reliability is restricted. Diana. C. Echeverry ...read more.