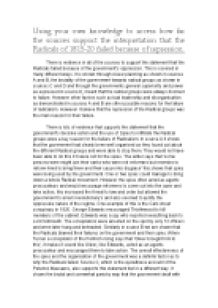 Using your own knowledge to access how far the sources support the interpretation that the Radicals of 1815-20 failed because of repression.

﻿Using your own knowledge to access how far the sources support the interpretation that the Radicals of 1815-20 failed because of repression. ________________ There is evidence in all of the sources to support the statement that the Radicals failed because of the government?s oppression. This is covered in many different ways. It is shown through clever planning as shown in sources A and B, the brutality of the government towards radical groups as shown in sources C and D and through the governments general superiority and power as expressed in source E, meant that the radical groups were always doomed to failure. However other factors such as bad leadership and disorganisation as demonstrated in sources A and B are other possible reasons for the failure of radicalism. However I believe that the repression of the Radical groups was the main reason for their failure. There is lots of evidence that supports the statement that the government?s decisive action and the use of Spies to infiltrate the Radical groups were a key reason for the failure of Radicalism. In source A it shows that the government had clearly been well organised as they found out about the different Radical groups and were able to stop them. ...read more.

The ?Peterloo massacre? was not popular and there were protests around the country. This may have increased radical popularity, although it did not matter as the government decided to introduce further repressive laws to limit Radical growth for instance the ?six acts?. In source D similarly it depicts the over zealous governments attempts to stop the spread of Radicalism. It has no ulterior motifs. It was merely his take on the events that was released long after it happened. ?Calvary entered the field at a brisk trot? panic seized the crowd?. Source D suggests that every aspect of the Radical meetings were controlled if the government believed that the radicals would gain respect and support they would brutally break up the meetings. Also if anyone fought back they could use this as a way of justifying the extremely repressive regime. Source E supports the view most by expressing collectively all of the repressive acts that the government inflicted not only on the radical groups but on the rest of England. In source E we are shown a cartoon that was published in a newspaper. It is very strongly for the statement that repression was the reason for the failure of the radicals. ...read more.

It shows that they received no support from the public. Similarly in source B we are shown that as a result of them killing mill owners that the public are no longer as supportive. One person?s actions discredited the whole movement and although the government set them up using spies people felt less for them than if they had not killed anyone. If the radicals had planned each of their movements better, spies would not have infiltrated their ranks so easily and they could have a had a more definite plan and had a better relationship with the public and would have been more successful and likely to succeed. In conclusion the sources as a group do support the view that the Radicals failed because of repression. The repression was represented in the form of the government?s use of spies, the power of the government and their barbaric and zero tolerance way of dealing with the radicals. However, the disorganisation of the Radicals made it easier to secure their failure. I agree with the statement that repression was the reason the radicals failed to a certain degree, because it was not entirely down to the government that the radicals failed, the government were able to ensure the failure of the radicals by launching a very flawed movement of repression. ...read more.