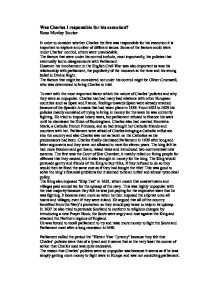 Was Charles I responsible for his execution?

Was Charles I responsible for his execution? Rosa Morley Souter In order to consider whether Charles the first was responsible for his execution it is important to explore a number of different issues. Some of the factors could were under Charles' control, others were unavoidable. The factors that were under his control include, most importantly, his policies that eventually led to disagreements with Parliament. However his involvement in the English Civil War was also important as was his relationship with parliament, the popularity of the monarch at the time and his strong belief in Divine Right. The factors that might be considered not under his control might be Oliver Cromwell, who was determined to bring Charles to trial. To start with the most important factor which the nature of Charles' policies and why they were so unpopular. Charles had had many bad relations with other European countries such as Spain and France. Feelings towards Spain were already strained because of the Spanish Armada that had taken place in 1588. From 1625 to 1629 his policies mainly consisted of trying to bring in money for the wars he was currently fighting. He tried to impose heavy taxes, but parliament refused to finance his wars until he dismissed the Duke of Buckingham. Charles also had married Henrietta Maria, a Catholic French Princess, and so had brought her Catholic friends and courtiers with her. Parliament were afraid of Charles bringing a Catholic influence into the country and also Charles was not as harsh on the Catholics as his predecessors had been. Charles finally dismissed Parliament in 1629 after long and bitter arguments and they were not allowed to meet for eleven years. ...read more.

But even though there was a growing amount of a new, more radical, group of Puritans, the vast majority of the House of Lords and Commons wanted to support the king. They were hoping to make more peaceful compromises with the King; they were not expecting war and would not have wanted to because war would have damaging effects to their lives. They mainly consisted of the governing classes such as lawyers and merchants and war would not have been good for their income. However, the more the King refused to compromise with them and the more he dismissed them the less they trusted him. Even the royalists were losing their trust in King Charles. Both the Royalists and the Parliamentarians wanted to be able to have a more productive relationship with the King and both had more or less the same interests at heart such as religious and economic issues. However, with doubts over whether Charles was suitable to govern the country, they found themselves on opposite sides. The distrust was used in the trial as evidence of betraying the people of England, the prosecution said the charges were against "Charles Stuart, King of England." And they were acting "on behalf of my clients, the people of England." This is clear evidence that they recognised him to be a King, in they seem to put great evidence on it, but they put him on trial anyway. This shocked and scared many people, including the parliamentarians, but the tactic was to put not just Charles himself on trail, but the whole idea of a monarchy. The accusations of mistrust and tyranny were used as ways of linking these traits to the monarchy. ...read more.

He not only wanted to throw out Charles, but the monarchy as well. In conclusion, there are only a few factors that suggest that Charles the I was responsible for his own execution. Many of the factors of his execution such as his behaviour at the trial and his behaviour as King were under his control and could have meant that he did not have to be beheaded. For instance; he did not have to continue the tradition of Divine Right because he knew it could cause opposition. He did not really have the political knowledge or skill to assert himself without causing discontent amongst his advisors. In many ways he was one of the main factors in the Civil War and the Civil War was then brought up as one of the charges against the King in his trial. His unshaken belief in the Divine Right then led to what seemed like arrogance crossed with bravery at his trial, it is hard to judge whether he really was trying to be a proud and brave king or he that was being too arrogant to see that he could have prevented his death. If he had not treated the court with the contempt that he did then he might have lived. The only thing he could not have done anything about was Oliver Cromwell, but even then Cromwell might have tried to negotiate with Charles and agreed to abdicate. Then again, it may be possible that Charles knew that if he was executed then people would not agree with it and what he meant by the quote above was that it would not be long until the monarch will come back because that is what the people want. ...read more.