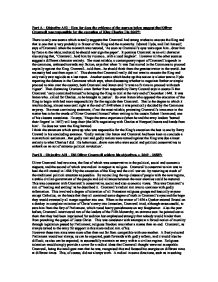 How far does the evidence of the sources below suggest that Oliver Cromwell was responsible for the execution of King Charles I in 1649?:

Part A - Objective A02 - How far does the evidence of the sources below suggest that Oliver Cromwell was responsible for the execution of King Charles I in 1649?: There is only one source which actually suggests that Cromwell had strong wishes to execute the King and that is one that is very probably in favour of the King and the monarchy. Edward Hyde, and Earl himself, says of Cromwell when the monarch was restored, 'As soon as Cromwell's eyes were upon him...drew him by force to the table; and said, he should now sign the paper'. It portrays Cromwell as an evil character also saying that, 'Cromwell...held him by violence...with a loud laughter'. However all the other sources suggest a different character entirely. The most reliable, a contemporary report of Cromwell's speech in the commons, unbiased towards any faction, says that when 'it was first moved in the Commons to proceed capitally against the King, Cromwell...told them...he should think them the greatest traitor in the world...but necessity had cast them upon it'. This shows that Cromwell really did not want to execute the King and only really saw regicide as a last resort. Another source which backs up this notion is a letter sent to Hyde reporting the debates in the Commons which says, when discussing whether to negotiate further or simple proceed to take over the country, both Cromwell and Ireton said 'it was no fit time to proceed with such vigour'. ...read more.

A freely-elected Parliament would not always, as can be expected, push forwards with godly reform, and it would also be difficult, as also can be expected, to successfully maintain an army within a civilian regime. Religious toleration would simply provide a cover for a radical ideas that Cromwell thought were not acceptable. Cromwell, being the intelligent man that he was, recognised this and focused his energies on different aims at different times. This, of course, did not always work. A radical in some directions, such as in seeking the reform of the religious laws, Cromwell had to adopt a conservative attitude because he feareed that the overthrow of the monarchy might lead the country in to political collapse. Before the execution of Charles I he had even toyed with the idea of placing one of Charles'sons on the throne. He also resisted the abolition of the House of Lords. In 1647 he said that he was not 'wedded and glued' to any particular form of government. In the Spring of 1657 he was even tempted by an offer of the crown himself on the ground that it fitted better with the existing English institutions. But he refused to become king because he knew that it would offend his old republican officers. We can see that he had many different loyalities in many places so it was incredibly hard for him to persue his aims without offending people. ...read more.

Cromwell accepted the position of Lord Protector in 1653 in an attempt to restore stable government with a traditional structure to England. In this particular move, his conservative aim took priority. However his other, more radical aim, was to continue with godly reform. The Nominated Assembly had failed to this successfully, while the Rump had also been seen as dangerously unprecedented form of government. The failure of these was what led to the establishment of the Protectorate and I think this is the guise that Cromwell was most able to achieve the objectives he wanted to most in. So although in the late 17th century Cromwell was execerated as a 'brave bad man', it was admitted that he did achieve what he set out to do and 'make his country great'. In the 18th century though he was considered a nauseating hypocrite, while the 19th century, under the influence of writer Thomas Carlyle, regarded him as a constitutional reformer who had destroyed the absolutism of Charles I. Modern critics are more discriminating. His beleif in God's providence is analysed in psychological terms. Marxists blame him for betraying the cause of revolution by suppressing the radical movement in the amry and resisting the policy of the Levellers. On the whole he is regarded only in a very limited sense as a dictator, but rather as a patriotic ruler who restored political stability after the civil wars and contributed to the evolution of constitutional government and religious toleration. ...read more.