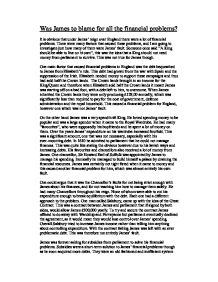 Was James 1st to blame for all the financial problems?

Was James to blame for all the financial problems? It is obvious that under James' reign over England there were a lot of financial problems. There were many factors that caused these problems, and I am going to investigate just how many of them were James' fault. Someone once said "A King should be able to live on hi own", this was the idea that a King should not need money from parliament to survive. This was not true for James though. One main factor that caused financial problems in England was the debt bequeathed to James from Elizabeth's rule. This debt had grown from the war with Spain and the suppression of the Irish. Elizabeth needed money to support these campaigns and thus had sold half the Crown lands. The Crown lands brought in an income for the King/Queen and therefore when Elizabeth sold half the Crown lands it meant James was starting off on a bad foot, with a debt left to him, to overcome. When James inherited the Crown lands they were only producing �128,00 annually, which was significantly less than required to pay for the cost of government, defence administration and the royal household. ...read more.

One could argue that it was the Chancellor's faults for not being strict enough with James about his finances, and for not teaching him how to manage them safely. He had many Chancellors throughout his reign. None of whom were able to cut his expenditure enough to break equilibrium with the debt. Each one had a different approach to the problem. One man called Salsbury, came up with the idea of the Great Contract. This was a contract between James and parliament that if signed by both sides, would allow James �200,000 yearly. To try and secure the contract James offered to do away with Wardship and Perveyance but parliament eventually declined the agreement, as it would mean they would lose control over James' spending. Overall Salsbury tried to increase James income rather than telling him anything about controlling expenditure. With the contract failing James was left with an ever problematic debt. This was therefore not entirely James' fault. James was forever asking for subsidies from parliament to solve his financial problems. ...read more.

The crown lands value were not rising with inflation either, which meant that again he was not earning as much money as he should have been from them. However was this James' fault? James had admitted to not being able to manage finance to parliament, yet they still expected him to notice and alter things like the book of rates, which to be honest, he probably had no idea about. Therefore I feel it was also parliaments fault for not aiding James enough. One of James' chancellors Thomas Sackville, did eventually change the book of rates according to inflation but by this time James had lost a lot money due to the outdated system. In conclusion I don't think James was to blame fully for all the finance problems. I think he definitely contributed to them the most and did not do anything really to manage the debt. His spendthrift ways and complete lack of financial awareness were, I feel the main factor causing his financial problems. However I do feel that parliament were to blame as well, for not aiding him enough, and for not being efficient and effective in collecting taxes. ...read more.