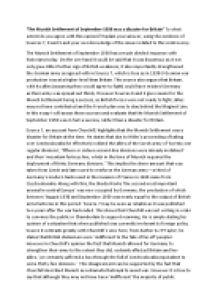 Was the Munich Settlement a disaster for Britain in 1938?

﻿?The Munich Settlement of September 1938 was a disaster for Britain? To what extent do you agree with this opinion? Explain your answer, using the evidence of Sources 7, 8 and 9 and your own knowledge of the issues related to this controversy. The Munich Settlement of September 1938 has a much divided response with historians today. On the one hand it could be said that it was disastrous as it not only gave Hitler further sign of British weakness, it also importantly strengthened the German army as agreed with in Source 7, which is true as in 1938-9 German war production was at a higher level than Britain. This source also argues that Britain, with its allies (assuming they would agree to fight) could have resisted Germany as their army was spread out thinly. However Sources 8 and 9 give reason for the Munch Settlement being a success, as British forces were not ready to fight, allies may not have contributed and the French plan was to stay behind the Maginot Line. ...read more.

However it is true to say that although they may not have been ?indifferent? the majority of public reaction favoured appeasement and it was approved in the House of Commons 366 votes to 144. Furthermore, in Source 7, Churchill indicates that only five of the thirteen German divisions were composed of front line troops, and the rest were ?left in the West at the time of the Munich arrangement.? This shows his thoughts that Britain made a vital mistake and should have resisted as the German army was stretched thin. This is true as had a European war broken out in 1938, Germany would have had to fight on two fronts. Churchill?s opinion may be supported if Britain, France, Czechoslovakia and the USSR had all resisted as the Luftwaffe was not ready for an attack, the French were still the best army in Europe and Czech forces weren?t negligible. Source 9 disagrees with Source 7 as ?unlike Churchill in 1938 Chamberlain had knowledge of what passed for the French war-plan.? A plan of which decided the French would ?wait behind the Maginot Line untill British had expanded their Army?, a plan which would have relieved the Czechs. ...read more.

Although Chamberlain emphasised that foreign policy was still appeasement and that that rearmament had been instated simply as insurance. Overall the Munich Settlement was not an easy choice for Chamberlain as the results of appeasement or resistance both could have ended with disastrous consequences. It is important to address that the settlement was humiliating and betraying to the Czech?s who lost a great amount after the German invasion as shown in Source 7. The settlement also allowed for the German army and crucially, Hitler?s position in Germany to be strengthened. However had Chamberlain immediately resisted Hitler?s intention to invade Czech, the British Armed Forces would have been far from prepared, and despite German forces being weaker before the Munich Settlement as Churchill states in Source 7, the likelihood of Britain defeating Germany was still not secure due to the French staying behind the Maginot Line, USSR being unreliable and South Africa and Australia?s reluctance to go to war. So altogether the Munich Settlement may be seen as a triumph as it vitally bought time for Britain to start rearming which if they had not done could have resulted in Britain losing WW2. ...read more.