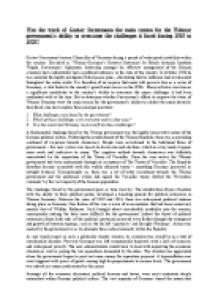 Was the work of Gustav Stresemann the main reason for the Weimar governments ability to overcome the challenges it faced during 1919 to 1929?

Transfer-Encoding: chunked ﻿Was the work of Gustav Stresemann the main reason for the Weimar government?s ability to overcome the challenges it faced during 1919 to 1929? Gustav Stresemann became Chancellor of Germany during a period of widespread instability within the country. Described as ?Weimar Germany?s Greatest Statesman? by British historian Jonathan Wright, Stresemann?s diplomatic leadership amongst his effective management of the German economy have undoubtedly had a profound influence in the state of the country. In October 1926 he was awarded the highly prestigious Nobel peace prize ? illustrating that his influence had reverberated throughout the entire world. It is therefore of no surprise that many will perceive him as a savior of Germany; a vital factor to the country?s growth and success in the 1920s. Many will also view him as a significant contributor to the country?s ability to overcome the major challenges it had been confronted with at the time. But to determine whether Stresemann?s efforts to improve the status of Weimar Germany were the main reason for the government?s ability to subdue the many obstacles they faced, one must explore three principal questions: 1. What challenges were faced by the government? ...read more.

After all, he managed to improve the economy, the international status of Germany ? otherwise damaged from WWI, as well as contributed to the reduction of political extremism in the country; a product of economic growth. However, while that may be a valid interpretation of Stresemann?s leadership, it does not explore the many issues that were still not tackled with; those that yet remained in Weimar Germany. One of which would be the political divisions in German politics. Liberals, socialists, conservatives, nationalists? These Political divisions were exemplified by divisions in German society. Political parties had their own books, magazines, bars, choirs, sports clubs etc. Indeed it made it very difficult for political parties to collaborate during the 1920s and early 1930s. This therefore made German government rather tricky because proportional representation meant it was difficult for a single party to win a majority in the Reichstag. Coalition governments were necessary where parties had to work together ? yet these often resulted in a lot of disagreement thereby undermining the new constitution. Stresemann was unable to solve this inherent weakness of the Weimar constitution and it remained within successive governments. ...read more.

Beyond all, Gustav Stresemann was still not the sole contributor towards German stability and prosperity in the 1920s. As had been clarified, Ebert, Hindenburg, article 48 and right-wing cooperation all had a certain involvement in this. While other factors certainly had their part, It seems however, that Stresemann was indeed the main reason for the Weimar?s government?s ability to overcome the challenges it faced during 1919 to 1929. If it wasn?t for Stresemann?s leadership, political extremism may have still remained a major threat to the government. It was due to Stresemann?s economic policies that such a threat was actually diminished. Should the prospect of a far-left revolt have persisted, perhaps the history of Weimar government may have turned out entirely different. Moreover, Stresemann?s ability to improve the country?s international status also helped it, in that the allies now had a better relationship with Germany. This meant Germany more support and as a result, was no longer left in an isolated and vulnerable state. I therefore agree with the given interpretation that it was predominantly Gustav Stresemann?s service that helped eliminate the challenges confronting the government at the time. The other factors alone do not appear strong enough to have overcome such challenges, and it seems that without the support of Gustav Stresemann, Weimar Germany would have most likely encountered even larger complications throughout its existence. ...read more.