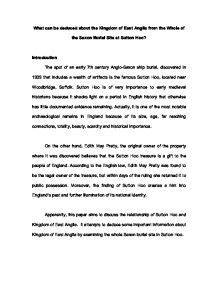 What can be deduced about the Kingdom of East Anglia from the Whole of the Saxon Burial Site at Sutton Hoo?

What can be deduced about the Kingdom of East Anglia from the Whole of the Saxon Burial Site at Sutton Hoo? Introduction The spot of an early 7th century Anglo-Saxon ship burial, discovered in 1939 that includes a wealth of artifacts is the famous Sutton Hoo, located near Woodbridge, Suffolk. Sutton Hoo is of very importance to early medieval historians because it shacks light on a period in English history that otherwise has little documented evidence remaining. Actually, it is one of the most notable archaeological remains in England because of its size, age, far reaching connections, totality, beauty, scarcity and historical importance. On the other hand, Edith May Pretty, the original owner of the property where it was discovered believes that the Sutton Hoo treasure is a gift to the people of England. According to the English law, Edith May Pretty was found to be the legal owner of the treasure, but within days of the ruling she returned it to public possession. Moreover, the finding of Sutton Hoo creates a hint into England's past and further illumination of its national identity. Apparently, this paper aims to discuss the relationship of Sutton Hoo and Kingdom of East Anglia. It attempts to deduce some important information about Kingdom of East Anglia by examining the whole Saxon burial site in Sutton Hoo. ...read more.

He was also the first East Anglian king to convert to Christianity, although he never fully dismisses his pagan beliefs. At his temple in Rendlesham, there was both a Christian and a pagan shrine. In addition, according to Carver, M. (1998), the gossips about the burial of R�wald at Sutton Hoo are supported by the carbon dating of the coins found at the burial site to 625 which is the same year that R�wald died. Also, Christian symbols were found in the burial ship at Sutton Hoo, including two spoons with the names Saul and Paul engraved on them, which would coincide with R�wald's religious beliefs. Furthermore, Archaeologists, particularly ethnoarchaeologists, have examined and accounted on human sacrifice among the Saxons, such as the bog people (Hines, 1997; 380-84). Among the Anglo-Saxons the proof for human sacrifice is less convinced, perceptible mainly through indirect evidence, such as the Anglo-Saxon name for November, Blodmonath: Bloodmonth, the month of sacrifice (Bede, "De mensibus Anglorum"). The "sand-body" forms found around mound 5 of Sutton Hoo may represent executed rather than sacrificed bodies; we cannot know for sure (Carver, 1998; 137-43). However, if human oblation indeed gave way to other forms of scapegoating among the early Anglo-Saxons, it was not abandoned by some of their later rivals: If the memory of paganism survived better among Scandinavians than other Germanic peoples, it may have been more strongly rooted to start with. ...read more.

The preference for a barrow burial may in these instances have been religiously inspired. In most cases, however, burials underneath mounds were carried out not by the upper nobility but by members of local elites. On the Continent, their choice was either a separate elite cemetery or a burial mound. In England, the local elites expressed a clear preference for barrows, either isolated or in groups (Shephard 1979: 48, 50). Conclusion There are so many things that we can deduced about the Kingdom of East Anglia from the whole of the Saxon burial site at Sutton Hoo i.e. history, literature, customs, traditions and even wealth of past Saxons. However, the examination of the whole Saxons buried site in Sutton Hoo lead as to one important thing which is the value of commemoration. Burial customs or funerary practices in general maintain existing social structures through the use of religious or ideological concepts (Parker Pearson 1982). The graves of Germanic peoples, furnished with weapons, reflect their warrior ideology. Within that specific ideological concept, the wealth of the grave goods may indicate the status of the mourners, rather than the warring exploits of the deceased (Harke 1990). Graves inside churches and in close proximity to relics indicate prestige and status within the Christian religion. But churches themselves were, to Germanic eyes, a grandiose innovation of the funerary rite. Moreover, such graves were monuments, to be admired by the generations that followed. ...read more.