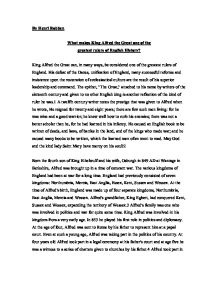 What makes King Alfred the Great one of thegreatest rulers of English History?

By Henri Robben What makes King Alfred the Great one of the greatest rulers of English History? King Alfred the Great can, in many ways, be considered one of the greatest rulers of England. His defeat of the Danes, unification of England, many successful reforms and insistence upon the restoration of ecclesiastical culture are the result of his superior leadership and command. The epithet, "The Great," attached to his name by writers of the sixteenth century and given to no other English king is another reflection of the kind of ruler he was.1 A twelfth century writer notes the prestige that was given to Alfred when he wrote, He reigned for twenty and eight years; there are few such men living: for he was wise and a good warrior; he knew well how to curb his enemies; there was not a better scholar than he, for he had learned in his infancy. He caused an English book to be written of deeds, and laws, of battles in the land, and of the kings who made war; and he caused many books to be written, which the learned men often went to read. May God and the kind lady Saint Mary have mercy on his soul!2 Born the fourth son of King Ethelwulf and his wife, Osburgh in 849 AD at Wantage in Berkshire, Alfred was brought up in a time of constant war. ...read more.

This innovative reform was exactly what Wessex needed to defeat the Dane invaders. "It provided the sizable and ever-alert force necessary to resist large, mobile Danish armies."9 Alfred's reorganization of the fyrd did not remain a permanent factor in the English defense. It drastically increased the terms of military service and therefore was discontinued after the defeat of the Danes. Alfred also knew that along with defeating the Vikings on land, he was going to have to challenge their greatest advantage, the sea. Alfred built a fleet of sixty-oared ships in order to meet the Danes on water.10 These ships were built of Alfred's own design. He followed neither the Frisian nor Danish patterns but created a design he felt would serve the needs of his kingdom.11 He looked at the Dane's fleet as well as the war he was fighting and built ships that would be to his advantage. The third and, quite possibly, the most important military reform that King Alfred made was to form burghs throughout Wessex. These burghs were a "system of large walled and fortified settlements."12 A document called the Burghal Hidage illustrates the burgh system. It reveals thirty large burghs about twenty miles apart. The burghs were arranged so that no one in Wessex would be more than one day's walk away. The Burghal Hidage also reveals how the responsibilities of maintenance and defense were divided as well as the dimensions of the fortifications. ...read more.

Alfred's most prominent ideal was that aristocrats be literate. he wanted his court to be knowledgeable in Christianity. In order to achieve this ideal, he and his court scholars translated from Latin to Anglo-Saxon the works of Bede, Boethius and Pope Gregory.21 Also among Alfred's literary works was the Anglo-Saxon Chronicle, a written history of England. The Chronicle illustrated the glories of the West Saxons and told how the kingdom had triumphed with the leadership of Alfred and his followers.22 Alfred's success as a military leader and his cultural and ecclesiastical reforms allow him to be considered one of England's greatest leaders. The institution of the system of burghs which allowed defense, culture and trade to flourish only scratch the surface of Alfred's creative abilities. The formation of a navy prove that Alfred knew what he was up against and needed to conform in order to be on the same level as his opponent. His genius in purchasing a truce proved highly successful in that he was able to buy enough time to reorganize his defense to result in defeating the Vikings and uniting England under one king. The establishment of an educational system showed that Alfred was not completely focused on combat but rather on the well being of his kingdom. By having an educated clergy as well as a knowledgeable upper class, his kingdom would be able to advance. All of Alfred's successes are legendary. He gained the epithet "The Great" because of his superior leadership and command. As a warrior, scholar, and statesman, Alfred is among the greatest leaders of English history. ...read more.