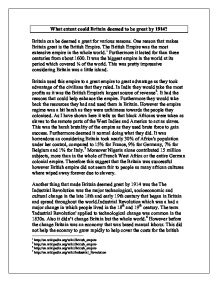 What extent could Britain deemed to be great by 1914?

What extent could Britain deemed to be great by 1914? Britain can be deemed a great for various reasons. One reason that makes Britain great is the British Empire. The British Empire was the most extensive empire in the whole world.1 Furthermore it lasted for than three centuries from about 1600. It was the biggest empire in the world at its period which covered 1/4 of the world. This was pretty impressive considering Britain was a little island. Britain used this empire to a great empire to great advantage as they took advantage of the civilians that they ruled. In India they would take the most profits as it was the British Empire's largest source of revenue2. It had the reasons that could help enhance the empire. Furthermore they would take back the resources they had and used them in Britain. However the empire regime was a bit harsh as they were unfairness towards the people they colonised. ...read more.

As a result of this domestic Britain improved massively such the canals, railways and roads where focused on to be improved. Moreover this led to less and less productions of agriculture and this caused a more and more people to move from the countryside to move to town. As a result of this it led towns to be overpopulated and people were competing for the same job. The reform act was a contributing factor in making Britain great by 1914. there were various reform acts before 1885 was the last year of reform. The first reform act was in 1832 which was introduced by the Whigs. The term whig was coined when an insurgency of the Scottish Presbyterians known as Covenanters marched from the south west of Scotland on Edinburgh in 1648, with the country folk using the word "whiggam" to urge on their horses 5. Here they helped form contitutions in new towns. However the voting rights remained the same as middle class were allowed to vote. ...read more.

But the work they were put in was normally emotionally and physically demanding, for example, visiting the sick in slum areas. However that seemed too changed by 1914 as women were called for work as Britain had gone to war. This war helped women to actually change the system because they helped with all the technological equipments for the war. Overall in my opinion Britain was deemed to be great by 1914 for many reasons such as the British empire. This was the greatest empire ever as it had all the foundations and seemed to be unstoppable. By 1914 Britain has aquired 1/4 of the world. However it did not reflect the what they had to do to become a huge empire. Britain introduced reform act to help the voting in the country and it also had the industrial revulotion. This sparked off a worldwide doing as countires like Germany and America tried to match the amount that Britain produce. Futhermore by the 1914 they were so strong that going to war wasn't a problem as they were well equipped as they had the best navy in the world. ...read more.