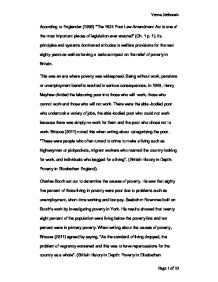 What was the impact of the Poor Law Amendment Act on the relief of poverty?

According to Englander (1998) "The 1834 Poor Law Amendment Act is one of the most important pieces of legislation ever enacted" (Ch. 1 p. 1). Its principles and systems dominated attitudes to welfare provisions for the next eighty years as well as having a serious impact on the relief of poverty in Britain. This was an era where poverty was widespread. Being without work, pensions or unemployment benefits resulted in serious consequences. In 1849, Henry Mayhew divided the labouring poor into those who will work, those who cannot work and those who will not work. There were the able-bodied poor who undertook a variety of jobs, the able-bodied poor who could not work because there was simply no work for them and the poor who chose not to work. Briscoe (2011) noted this when writing about categorising the poor. "These were people who often turned to crime to make a living such as highwaymen or pickpockets, migrant workers who roamed the country looking for work, and individuals who begged for a living". (British History in Depth: Poverty in Elizabethan England). Charles Booth set out to determine the causes of poverty. He saw that eighty five percent of those living in poverty were poor due to problems such as unemployment, short-time working and low pay. Seebohm Rowntree built on Booth's work by investigating poverty in York. ...read more.

Also the fact that France was again entangled in revolution had, demonstrated by Evans (1994), "briefly threatened to disturb the tranquility of Europe" (Ch. 7 p. 46). The Commissioners worked with a view of reforming the old Poor Law. The report, published in early 1834, recommended radical changes, which were designed to save money and improve efficiency. Separate workhouses were to be provided for the aged and infirm, children, able-bodied females and able-bodied males. Parishes were to group into unions to provided workhouses. A new central authority was to be formed to enforce regulations concerning the workhouse system and lastly, all outdoor relief would stop. The conditions inside the workhouse would need to be made so dire that no one would readily choose to enter them. The Poor Law Amendment Act gained royal assent in August 1834. All bar one of the recommendations were included in the act. Outdoor relief for the able-bodied poor was to be discouraged but was not abolished because the workhouses would be overcrowded and ultimately it would cost more. A central Poor Law Commission was established to administer the Poor Law Amendment Act throughout the country. The first task was to establish parish unions. They worked under immense pressure due to the urgency to reduce costs and because from 1837 the new unions were being used to administer births, deaths and marriages. ...read more.

91) by employers, employees and the state contributing to the health insurance scheme. It would supply a weekly income and include free medical treatment and maternity care. This was the most unpopular of the Liberal's welfare reforms due to payment being flat-rate, everyone had to pay the same, the poorer workers were hit the hardest. The 1909 Labour Exchange Act set up a series of labour exchanges that were intended to help the unemployed find work. The second part of the 1911 National Insurance Act dealt with insurance against unemployment. Workers could claim unemployment benefits but no claim could be paid if unemployment resulted from a person being dismissed for misconduct. The welfare state aimed to provide central support for all British citizens. The ranges of reform introduced by the Liberals were remarkable. They depended on local government and local services to deliver them. Beneficiaries of the two major schemes, health and unemployment insurance, were expected to contribute to the schemes. However, the Liberal reforms did not cover everyone. Payments were not universal and thousands of people were deliberately excluded. Still, the most important impact the Liberal reforms had were the shift in attitudes to poverty, paupers and the role the state had to assume for its people. The 1834 Poor Law Amendment Act saw that poverty was a misfortune rather than self-inflicted. It ensured that all aspects of poverty, employment and idleness were being improved and would eventually free people from poverty. ...read more.