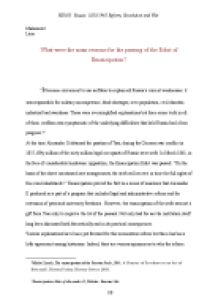 What were the mains reasons for the emancipation of Serfs in Russia?

ï»¿HI5055: Russia: 1855/1945 Reform, Revolution and War. Malmontet Léna What were the main reasons for the passing of the Edict of Emancipation? “It became convenient to use serfdom to explain all Russia’s current weaknesses: it was responsible for military incompetence, food shortages, over population, civil disorder, industrial backwardness. These were oversimplified explanations but there some truth in all of them: serfdom was symptomatic of the underlying difficulties that held Russia back from progress.[1]” At the time Alexander II obtained the position of Tsar, during the Crimean war conflict in 1855, fifty million of the sixty million legal occupants of Russia were serfs. In March 1861, in the face of considerable landowner opposition, the Emancipation Edict was passed: “On the basis of the above mentioned new arrangements, the serfs will receive in time the full rights of free rural inhabitants.[2]” Emancipation proved the first in a series of measures that Alexander II produced as a part of a program that included legal and administrative reform and the extension of press and university freedoms. However, the emancipation of the serfs was not a gift from Tsar only to improve the lot of the peasant. Not only had the servile institution itself long been discussed both theoretically and in its practical consequences. Various explanations have been put forward for this momentous reform but there has been little agreement among historians. Indeed, there are various opinions as to why the reform process was embarked upon. ...read more.

They did so as a natural extension of earlier, more narrow discussions about reform and change that had occurred within their government agencies during the 1840s and early 1850s[5].? So, the author explains the importance of the bureaucrats in the constitution of the edict that was so complex it could not have been generated as quickly as it appeared. For example, Konstantin Kavelin had written in 1848: ?I believe completely in the necessity of absolutism in present-day Russia but it needs to be progressive and enlightened"[6]. Indeed, the Imperial Russian Geographical Society became the more important point of contact between some individuals and Russia?s Government during the decade that separated the revolution of 1848 from the beginning of work on the Great Reform legislation in Russia. The Geographical Society was headed by Grand Duke Konstantin Nikolaevich who said: ?Given the absence of any civic life among us at that time, the existence of such a center [as Geographical Society] in which people interested in knowledge could gather for general discussions had a special value in the eyes of society"[7]. In addition, it is said that 14 of those who worked on the Editorial Commission that prepared the Edict in 1859 and 1860 had been members of the Imperial Russian Geographical Society in the 1840s and 1850s. Thus, Bruce Lincoln explained that a number of people had already started working on the question of the emancipation of the serfs throughout body as the Geographical Society. ...read more.

And generally, the question was raised about its social backwardness. People said that it was not possible to remain a powerful European state with the backward social system that existed. In addition, Seton-Watson told that ?The army was the great symbol of Russia?s worth. As long as its army remained strong Russia could afford to ignore its backwardness as a nation. But the Crimean defeat had undermined this notion of Russia?s invincibility. Few now had reasoned objections to reform. Serfdom was manifestly not working.[13]? To conclude, it appears in this essay that the edict of emancipation of the serfs was the result of a climate of questioning in Russian society on economic and social backwardness. The Crimean War and the defeat of the Russians have allowed a comparison between the movement of Western Europe in the commercial and industrial age and the backwardness of Russian Economy. In addition, the open mind of Alexander II was importante in the passing of the edict of emancipation. However, the consequences of the edict of emancipation were not those expected as stated the historian Hugh Seton-Watson:? Therein lays the tragedy of Emancipation. It is an outstanding example of tsarist ineptitude. Its introduction held out the possibility that Russia could build on this fundamentally progressive measure and modify its agricultural economy in such a manner as to cater for its vast population, which doubled to 125 million during the second half of the 19th century. But the chance was lost. So reduced was the peasant as an agricultural worker by 1900 that only half of his meager income came from farming. He had to sustain himself by laboring[14]. ...read more.