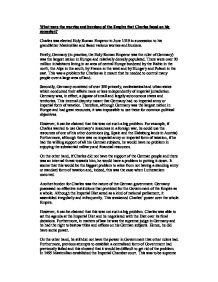 What were the worries and burdons of the Empire that Charles faced on his accession?

What were the worries and burdons of the Empire that Charles faced on his accession? Charles was elected Holy Roman Emperor in June 1519 in succession to his grandfather Maximilian and faced various worries and burdens. Firstly, Germany (in practice, the Holy Roman Emperor was the ruler of Germany) was the largest nation in Europe and relatively densely populated. There were over 20 million inhabitants living in an area of central Europe bordered by the Baltic in the north, the Alps in the south, by France in the west and by Hungary and Poland in the east. This was a problem for Charles as it meant that he needed to control many people over a large area of land. Secondly, Germany consisted of over 300 princely, ecclesiastical and urban states which conducted their affairs more or less independently of imperial jurisdiction. Germany was, in effect, a jigsaw of small and largely autonomous states and territories. This internal disunity meant that Germany had no imperial army or imperial form of taxation. Therefore, although Germany was the largest nation in Europe and had great resources, it was impossible to use these for common political objectives. ...read more.

In 1495 Maximilian established the Imperial Chamber court. This was to be supreme legal authority throughout the Empire. However, the Emperor, fearing a diminution of his own authority, ignored its legal pre-eminence and the experiment made little progress. Furthermore, in 1500 Maximilian set up the Regency Council. The council would allow the princes to rule Germany in the Emperor's absence and when he was resident it would act as a forum in which they could press their claims. However, Maximilian resented such a curtailment of his own role in government and put an end to the council in 1502. Therefore, it seems that Charles did not have as much power in government that other rulers enjoyed and it seemed that things would remain that way. This would have been a worry for Charles. This would make it difficult for him to pass legislation over the whole Empire and have an imperial army or an established system of imperial taxation. The Princes were a problem towards Charles. Their powers had increased throughout the fifteenth century and most controlled the administration of justice within their own lands. ...read more.

It is debatable whether Luther was a problem for Charles on his accesssion. Before, Charles became Holy Roman Emperor, Luther had begun his initial protest with the publication of the Ninety-Five Theses on 31 October 1517. He also had the support of Frederick of Saxony and had already been summoned to Augsburg in October 15118 to meet with the papal legate in Germany, Cardinal Cajetan, who appealed to him not to disturb the peace of the Church. Hence, Luther must have posed some threat. However, Lutheranism had not yet developed into the powerful force that it was to become. Most of Charles' worries were inter-linked. For example, Lutheranism could be considered a threat because the Emperor had no standing army and, if the threat developed, it would be hard to put down. Therefore, it is hard to say what was Charles's largest worry. However, overall, it is debatable whether the worries of the Empire were a problem to Charles. It seems that the empire entailed far more responsibilities than privileges since the title brought with it no actual power, only prestige, and, therefore, his other dominions could have been considered to be more important. Therefore, it can be claimed that none of Empire's problems were as big a worry for Charles. ...read more.