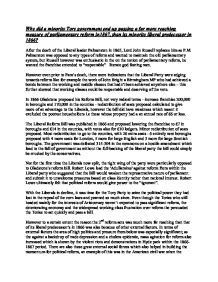 Why did a minority Tory government end up passing a far more reaching measure of parliamentary reform in1867, than its minority liberal predecessor in 1866?

Why did a minority Tory government end up passing a far more reaching measure of parliamentary reform in1867, than its minority liberal predecessor in 1866? After the death of the Liberal leader Palmerston in 1865, Lord John Russell replaces him as P.M. Palmerston was opposed to any types of reform and wanted to maintain the old parliamentary system, but Russell however was enthusiastic in the on the notion of parliamentary reform, he wanted the franchise extended to "respectable" literate god fearing men. However even prior to Pam's death, there were indications that the Liberal Party were edging towards reform like for example the work of John Bright a Birmingham MP who had achieved a bonds between the working and middle classes that hadn't been achieved anywhere else - this further showed that working classes could be respectable and deserving of the vote. In 1866 Gladstone proposed his Reform Bill, not very radical terms - increase franchise 200,000 in boroughs and 170,000 in the counties - redistribution of seats proposed calculated to give more of an advantage to the Liberals, however the bill did have weakness which meant it excluded the poorest householders i.e those whose property had a an annual rate of �6 or less. ...read more.

With the Liberals in decline, it was time for the Tory Party to seize the political power they had lost in the repeal of the corn laws and yearned so much since. Even though the Tories who still headed mainly for the interests of Aristocracy weren't expected to pass significant reform, the deteriorating economy and the widespread working class frustration over reform the persuaded the Tories to act quickly and pass a bill. However to a certain extent the reason the 2nd reform acts was much more far reaching than that of its liberal predecessor's in 1866 was also because of other external factors. In terms of external factors the area of high politics and pressure from below was especially significant; as the against a backdrop of trade depression and a cholera epidemic, mass agitation for reform also increased which is shown by the violent riots and demonstrations in Hyde park within the 1866-1867 period. There are also these great external social forces which also helped in building the momentum for political reform, an example of this was in the American civil war when the industrial North won over the Agrarian South which promoted slave labour because of it's thriving cotton trade. ...read more.

Although the Tories did initially set the ball rolling by proposing reform, eventually the bill gained momentum on its own accord, clear indication of this is how in trying to appeal the to the Radicals to get the bill through the H of C, the Tories had to imposed huge changes onto their initially simple bill; like enfranchising the previously missing �10 lodger, agreeing to Hodgkinson's amendment or abandoning their original idea of "fancy franchises". Disraeli ultimately felt that by pushing for parliamentary reform, the Conservatives might win over the previously working class factions that didn't appeal to them, who were now being enfranchised, so giving the Tories stronger grip on the suburbs and counties, In this way the Conservatives could break the long record of poor elections since and also gain the political power they were missing since the break of the party in 1847. Not only would it grant them more power, but Tories passing much more far reaching reforms in 1867 than benefited the average working man, could also challenge the age old perception that the Tories only saw the interests of the Aristocracy, and so essential in changing the public perception of the Conservatives. ...read more.